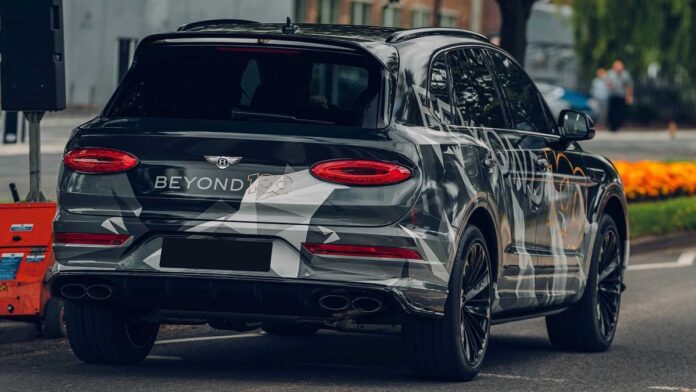 The first SUV by the luxury British carmaker is ready for the first big update. The company released a teaser, showed us the prototype, and announced the new 2021 Bentley Bentayga Speed model. It is already quite a change for the super-luxury SUV whose price will now be even higher. Well, Bentayga was on its own league for some while with the price exceeding $500,000 with options. Now, with Aston Martin, Lamborghini, and especially Rolls-Royce SUVs in the market, the situation is causing changes on Bentley’s model. More rivals are coming. Ferrari Purosangue SUV is the most notable name among all speculations.

Changes on the 2021 Bentley Bentayga are significant. Designers are delivering a new vehicle with updated interior and exterior. Headlights and grille are eye-catching on the prototype. The company is not providing details, but everything is becoming official on August 12th. So, in a couple of days, we will have all these details confirmed.

The 2021 Bentley Bentayga is presenting the new design language by the British carmaker. Definitely, the most notable changes are up front. The fascia comes with the fresh headlights and grille. Also, there is a new set of wheels. Elliptical headlights and taillights were not available on the previous model. This shape is being used even for the tailpipes. This is the first time the company is updating its flagship model. When it arrived in 2016, the SUV world was stunned with the presence of Bentley in this segment.

The exterior is not so special, since we can find some even more impressive solutions in the market. But, the interior of Bentley’s product is making a difference. It will be the same in 2021 with Bentayga. When you think about luxury, there is nothing beyond this one. Even when another company introduces something that could be called a rival, Bentley leaves them in the dust with Tourbillon clock by Breitling, a $180k upgrade. And that is just one of the many features.

For the 2021 Bentley Bentayga, we will see upgrades on the dashboard. A larger multimedia screen. Of course, features such as Apple CarPlay are standard. Designers revisited a center console with a new-look center wents and HUDs.

The upcoming season brings the new trim level for the luxury SUV. The 2021 Bentley Bentayga Speed is joining the lineup. This model is going to introduce a few more things to make the vehicle even more special. For example, bigger splitter, larger wheels, and a lot of badges will make you recognize the new model easier. Still, the overall impression is not too strong, like the base model did it back in 2016.

Inside, a unique contrast stitches are added, as well as a two-tone theme. Alcantara inserts are replacing standard upholstery. Carbon-fiber is optional, and custom plates are also there. A couple of more details are making the Speed version special, but experts still think Bentley could make it even better.

The power source for the 2021 Bentley Bentayga remains a potent W12 engine. A 6.0-liter displacement is turbocharged and creates 600 horsepower. For the Speed edition, engineers are squeezing 26 more ponies and increase the torque to 665 lb-ft. It is enough to drop the 0-60 mph acceleration time under 4 seconds. All-wheel drive is standard and the power goes through an eight-speed automatic gearbox. Max speed of the upgraded version is 190 mph.

In a couple of days, we will see the updated pricing of the new 2021 Bentley Bentayga. The base trim could go up to $250,000. However, the SUV is full of surprises, adding special features and options. Last time, it was a Turbillion clock. Now, the British carmaker can push it even further with optional upgrades. Bentayga Speed could reach even $300,000 with 626 horsepower engine. The premiere of the new 2021 Bentayga is set for August 12.