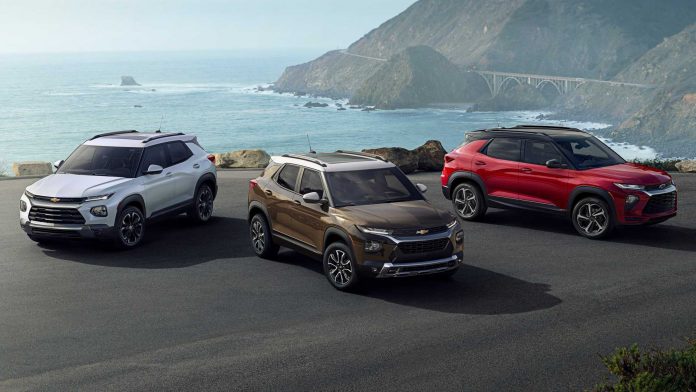 Soon after the debut of the new Blazer SUV, General Motors confirmed the production of the 2021 Chevy Trailblazer. Well, we are not sure yet if it is coming to the US since GM Authority is writing about the production in South Korea.

The new crossover SUV will be a smaller version of Chevy Blazer. Still, the lineup is full and we don’t know where the Trailblazer should fit. Equinox, Traverse, and now Blazer are compact and mid-size models. Well, recently we saw some sub-class models and the Trailblazer could be one of them.

That is not all. The vehicle warms up rumors about many other versions. For example, it seems that experts are pretty confident about the 2021 Chevy Trailblazer SS version. Well, we can hear the same for Blazer. The good thing about it is that SUV used to offer this performance-oriented model. Still, it is not so popular anymore, but it is interesting to see what could be under the hood of the new SS vehicle.

Finally, the price and release date are still a mystery. We need to wait for a year or so to find out what exactly the company plans with its new nameplate.

Where Will The 2021 Chevy Trailblazer Be Built?

The company surprised us with the debut of the 2021 Chevy Trailblazer. However, the rumors are informing that the new model will be built in the same plant as the Buick Encore GX. The GM factories in South Korea are capable to do such operations since the US market was supplied with Chevy Trax and Buick Encore from these plants. Now, the situation with imports is different and that is the major mystery. General Motors invested over $7 billion into the Korean department. A huge portion of this deal went for the new factories and capacity improvements. Trailblazer is one of the first models to take advantage of this process.

The 2021 Chevy Trailblazer will be a smaller version of Blazer. The carmaker introduced a new SUV for the US market. But, we still don’t know if its cousin is arriving in North America.

According to what we saw, the crossover is not going to offer as much space as Blazer. Still, the new model will be more efficient and agile. Whatsoever, we don’t know precise dimensions, since the company doesn’t plan to unveil them until the start of sales. According to rumors, the new Trailblazer will be 173 inches long and 71 inches wide. It will be interesting to see if the crossover gets more space under the body to provide extra gap and better off-road capabilities.

The drivetrain lineup of the 2021 Chevy Trailblazer is not going to offer a hybrid engine. General Motors is losing contact with competitors with such units. It will be hard for the new crossover to compete with Honda CR-V and Toyota Rav4. Even Ford is launching the Escape with an electric unit.

However, there is a couple of petrol units that will power the upcoming SUV. A 1.2-liter turbo-four is capable of producing 140 hp and 160 lb-ft of torque. If this is not enough, you can opt for a 1.3-liter version with 155 horsepower and 175 pound-feet of torque. Different drivetrain systems are there as well. The smaller displacement is pairing a CVT gearbox and the front-wheel drive. A 1.3-liter model is using a nine-speed automatic transmission and it has an option to distribute power to all wheels.

The RS model will come with special upgrades to boost the ride quality. The special suspension setup is going to bring sportier tuning and the new, more powerful engine is possible.

This is still a dream. A high-output version needs a banger under the bonnet. All we can do at the moment is to pray for this to happen. The 2021 Chevy Trailblazer SS is the special crossover based on the standard model. But, besides that, these two won’t have too many options in common. A more aggressive appearance, unique equipment inside the vehicle, and a beast in the engine room are things we expect from the SS badge. Whatsoever, it is not confirmed yet. You can consider it more likely to happen if the GM launches a similar version of the larger Blazer.

According to experts, the crossover will arrive at the US in 2021 with the price tag under $20,000. Well, you will want to upgrade the ride. Some of the standard trim levels buyers can find on other similar models will be used on the Trailblazer as well. LS and LT are the mid-range offer and the Activ is the high-end package. Also, we can expect a $26,000 price tag for the RS. The SS is not so affordable. If it is going to be cheaper than $40k, you will have to take it as a bargain.