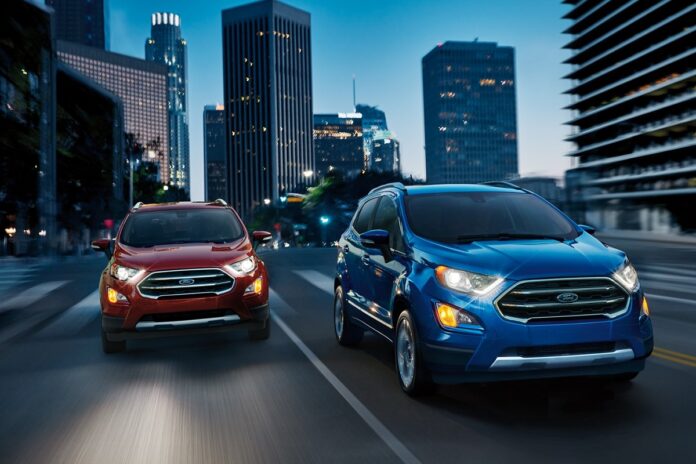 The subcompact segment is not as popular as classes that offer larger vehicles. So, the 2021 Ford EcoSport is probably a step closer to discontinuation. Puma is an all-new crossover ready to jump in. It is hard for the small model to make a breakthrough. EcoSport didn’t manage to do that. Puma will try with a new name and fresh styling.

The COVID-19 pandemic will give another year to the 2021 Ford EcoSport. The company announced minor changes for the upcoming crossover. These will include a new trim level, a few fresh colors, and revisited wheels. It won’t change the opinion about the subcompact model.

Ford Puma is a new crossover for the European market. The carmaker could try to revive the segment by replacing the EcoSport with this unit. But, it cannot guarantee high sales, especially with mini SUVs not being so popular in the US. On the other hand, the rest of the world shows more attention to these vehicles.

If you like mini crossovers, the 2021 Ford EcoSport is an excellent choice. Small, easy to park, efficient, perfect for urban driving. On the other hand, if you want to cover some serious distance, this type of vehicle is not for you. Everyday commuting will save you fuel since the gas mileage is 27 mpg with a 1.0-liter displacement. On the other hand, 125 hp is not enough when you get out from the heavy traffic. Also, you will need more space for passengers and cargo.

Still, the carmaker packs the subcompact model with a lot of features, such as Apple CarPlay and Android Auto. All-wheel drive is optional. Some companies are not offering the AWD for subcompact crossovers (Nissan, Toyota). We can also praise the audio system with built-in amp. So, the high-quality sound is coming at lower trims. Safety is not the best, but you can select optional features, such as a blind-spot monitor, to increase this segment.

Both powertrain options for the 2021 Ford EcoSport are not going to stun you with their performance. The base one is a 1.0-liter turbo I-3 with 125 hp and 125 lb-ft of torque. The engine is perfect for a city ride, where you don’t need crisp acceleration. With 27 mpg, it is one of the most efficient urban rides you can find. On the other hand, the performance on highways is very poor. Well, we don’t expect too much from a small, light, and not too powerful crossover. However, more fun of driving is coming from most competitors.

A six-speed automatic gearbox is standard both for inline-three and a 2.0-liter four-pot powerplant. In this case, the drivetrain returns 166 hp and 150 lb-ft of torque. It is much better, but not impressive, having in mind the price bump it brings. Fuel economy on the open road is the same like on the I-3 (29 mpg). We can also underline a respectable towing capacity of the 4-cylinder unit. 2,000 pounds in the subcompact segment is way above the average.

Chiefs are not happy with the market performance of Ford’s smallest SUV. For some while, they are considering what to do. The new Puma is a solution for the European market. But, can it come across the ocean and replace EcoSport?

This move would draw some attention. First of all, the new Puma will lure more fans to try it. Also, the updated styling is offering something different. On the other hand, it is still not proven crossover. Reliability, safety, resale value, are just a few things we want to know about the latest addition. Plus, Ford is more focused on the larger segments and electric Mach E SUV. Puma is using the same 1.0 displacement, but with 30 ponies more. A turbodiesel is not likely to appear in the US market.

The 2021 Ford EcoSport is not the most interesting vehicle in the company’s lineup, but it still can offer a lot of options for the build. There are four standard trim levels – S, SE, SES, and Titanium. For the subcompact class, upgrades such as B&O audio (9-speaker system), navigation, and leather upholstery are more than just ordinary. The crossover enters the premium waters and costs $28,000. The base trim levels cover the multimedia connectivity with two most important systems in that world – Apple CarPlay and Android Auto. But, you can’t expect too much from a vehicle that costs just under $20,000. Where it is available, a 4-cylinder engine will increase the price for $1,500.

Some rumors are mentioning a hybrid unit. However, it is not likely to happen. None source gave any kind of indication. Also, some fans asked about sporty upgrades, such as RS or ST. Again, the 2021 Ford EcoSport is the last edition of the subcompact crossover and the carmaker won’t spend extra for such experiments. Ford Puma is available with the ST package, though.