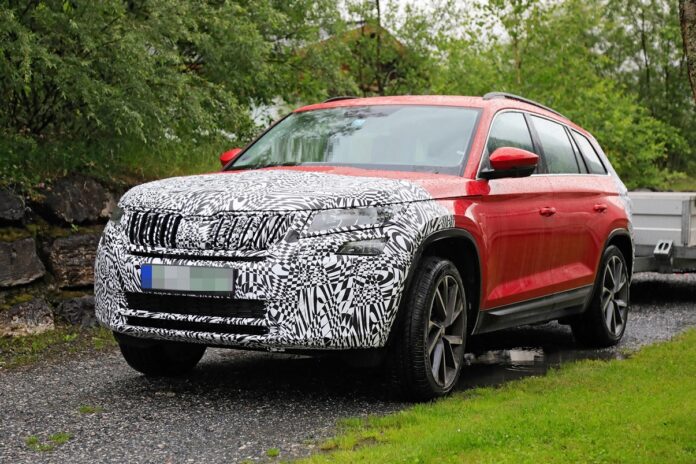 Everything you need to know about the 2021 Skoda Kodiaq is here. The Czech company is now a serious player in the European market. The partnership with VW made them blossom again after they produce famous cars in the 80s. After the success of Fabia hatch, and Octavia and Superb sedans, Skoda started producing crossovers and SUVs. Kodiaq is the largest one in the lineup, and it is going through a facelift for the upcoming season.

Spy photos are unveiling that the development of the new 2021 Skoda Kodiaq is in the final stage. There is no too much camo. But, from the position and parts it covers, we can assume where to expect the most changes. What we won’t see is a new drivetrain. The carmaker is preparing the performance-oriented Kodiaq RS with improved specs. That is not everything about this SUV. The interior comes with a fresh look and layout. Still, the biggest change is the next-gen infotainment system. So, there is a lot of reasons to wait for the 2021 Kodiaq eagerly.

The new SUV has been spied a couple of times recently. On every occasion, the 2021 Skoda Kodiaq wore camo, but not over the entire body. Front and rear fascia are hiding something, while the rest of the vehicle is pretty much the same. It is not hard to guess that a new nose will have the goal to draw more attention. Of course, parts that suffer the most are grille, headlights, and bumper. Hood should be the same. At the back, taillights and bumper are fresh, while exhaust tips can take a new position. Wheels are larger on test mules, but Skoda will offer a choice to buyers.

We are still gathering information about the cockpit changes on the upcoming 2021 Skoda Kodiaq. Designers won’t make radical moves. The SUV remains a seven-seater. A downside of this configuration is a lack of headroom at the back. On the other hand, there is a surprisingly enough space for legs, even when the middle row is not pushed forward. If you don’t need it, you can fold the rear seats and create more space for luggage. Test mules seem to be the same size as before, so the 2021 Kodiaq is going to offer the same boot space for items.

As the flagship model, the large SUV will be the first to get the new infotainment system. Like most other parts, the Skoda will base it on the latest VW technology. Laura is the voice assistant and these commands will include some online functions. The carmaker will replace ports with USB-C sockets. The center of the multimedia is a 6.5-liter touchscreen, but it can become larger on upper trim levels. You can also add the SIM card for the internet. Online features can be controlled through voice commands. Laura assistant is available in 15 languages. Apple CarPlay and Android Auto are integrated. Top trim levels come with navigation and a huge 9-inch display. Optional upgrades include Bolero navigation updates, as well as Amundsen and Columbus radio services.

The power output of the SUV depends on the market where it is available. Australian buyers are getting 132 kW (177 hp) and 320 Nm (235 lb-ft) of torque from a petrol unit. In Europe, a 2.0-liter turbodiesel engine can make 150 or 190 hp and much more twist. According to the latest reports, engineers will squeeze more power from the drivetrain, making it produce 200 hp. Two- and four-wheel drives are options, while the power router is a 6-speed DSG auto.

Top of the line version is the 2021 Skoda Kodiaq RS, and engineers are updating the performance model as well. The bi-turbo diesel configuration was ready to crunch 240 horsepower. Another boost is expected, so the new SUV can offer even more power. However, we don’t have any details about performance enhancement. Some sources say it could go up to 300 hp, while other sources are mentioning Kodiaq Hybrid. Not impossible having in mind that more vehicles are being underpinned by the VW ID concept. Fans will see more and more electric units in the future for the entire Volkswagen Group, including big Skoda SUV.

When Will 2021 Skoda Kodiaq Be Available?

With so many updates, the new 2021 Skoda Kodiaq could launch the next generation. Nevertheless, the redesign is missing and the facelift cannot cover that. On the other hand, all other changes are very serious and the company plans a serious impact to the European market. Test mules look production-ready, and it is just a matter of time when will the upcoming Kodiaq be launched. Experts believe at the end of this summer or the final quarter of 2020.