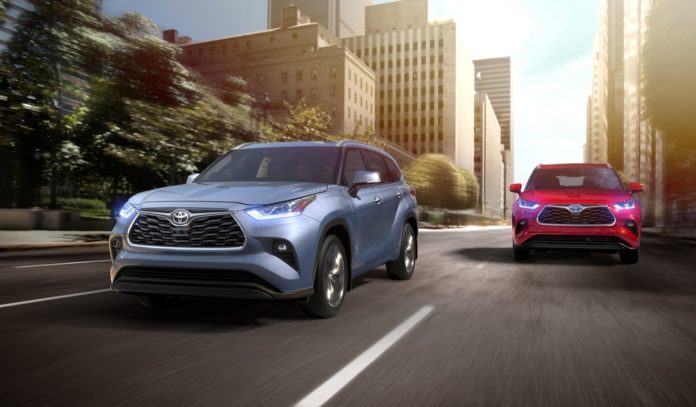 Highlander’s smaller sibling, Rav4, is getting the plug-in system to upgrade the hybrid configuration. The new mid-size SUV could follow the steps of its little brother. For a long time, this was the only mid-size three-row model with a hybrid drivetrain. Now, we see more vehicles, especially in the premium segment. Other carmakers are catching up with the Japanese giant. Alarm speeds up the development of the 2021 Toyota Highlander plug-in hybrid.

The current version of the SUV was refreshed. The all-new model is the final redesign before the carmaker launches the new generation. It is not going to happen before 2024. The 2021 Toyota Highlander won’t bring any cosmetic changes. The only reason why we are searching for news about it is the plug-in hybrid drivetrain.

The redesign of the Highlander brought the new petrol drivetrain for the hybrid setup. Immediately, fans started asking if the next version is getting the plug-in system. Well, everything is still mysterious. Information we have and opinions are divided.

The main argument why we won’t see the 2021 Toyota Highlander PHEV is the mechanical similarity with the Rav4. While the smaller crossover represents the performance vehicle, with higher outputs, the SUV would offer similar numbers. That is definitely not something that can draw the attention of buyers.

On the other hand, more other rivals are getting hybrid units. Toyota made a serious step with the new configuration. However, we expect Honda Pilot to appear with the PHEV technology, as well as other rivals that are competitive to the regular Highlander.

Read more reasons why we won’t see the PHEV version at AutoGuide.

Instead of the large V6 engine, the new SUV now uses a four-cylinder unit to produce power for the 2021 Toyota Highlander. A 2.5-liter unit is mated to an electric motor. This combination is good for 243 horsepower. Compared to the predecessor with a larger powerplant, that is more than 60 ponies less.

Smaller displacement, so the less power is expected. On the other hand, the fuel economy reaches 35 mpg combined. Other mid-size SUVs can only dream about this output. No matter if you choose front- or all-wheel drive, the new Highlander will surprise you with its fuel economy.

V6 is the Standard Offer

The 2021 Toyota Highlander still relies on a 3.5-liter V6 unit. Compared to the hybrid edition, the internal combustion engine is sending power through an eight-speed gearbox, instead of a CVT. The total outputs are 295 hp and 265 lb-ft of torque. This is enough for 23 mpg combined, 12 fewer than the new hybrid system. Well, extra power makes V6 more capable of towing. The SUV can pull 5,000 pounds with the conventional configuration. After the facelift, we don’t have a 2.7-liter engine in the offer.

The new base version for the V6 model is L. It is not available for the hybrid configuration. Three-zone climate control and power driver seat are highlights of this model. Toyota finally added Apple CarPlay and Android Auto, which are available right from the entry-level version.

The LE is the next trim, and one of the options for this one is a hybrid system. It upgrades the previous model with a power tailgate, LED fog lights, leather steering wheel, and blind-spot monitors.

The XLE uses a unique SofTex synthetic leather for seats and upholstery. The driver’s bucket has more positions and heating for the front row is now available. The interior impression is boosted with the power sunroof. The seating capacity drops to seven passengers thanks to the captain’s chairs in the middle row.

Limited edition is adding luxurious features. Highlights are the leather seats (front row with ventilation), JBL audio, hands-free tailgate, and advanced navigation. Outside, you will recognize this SUV by the 20-inch wheels.

The 2021 Toyota Highlander Platinum brings the best the company has to offer. At the center of the dashboard is a 12-inch screen. Above the steering wheel, you will find the HUD. Bird’s eye camera is helpful, while the rearview camera is now digital. Panoramic sunroof replaces the standard power sunroof available on XLE and Limited models.

The new Highlander comes with updated prices. The new version is slightly more expensive than its predecessor and the offer starts at nearly $35,000. Highlander is becoming one of the most expensive models in the segment, which is not good news. LE adds $2,000 and XLE is just under $40k. Top of the class Platinum model reaches $48,000 with a hybrid drivetrain. The entry-level LE costs $1,400 more than the configuration with a V6 engine.

Compared to the competition, the 2021 Toyota Highlander is significantly more expensive than the Honda Pilot. But, we would rather go head to head with some newer version, for example, Ford Explorer. The SUV by the Blue Oval company sells its fresh SUV at $33,500. Hybrid is more powerful and comes with more equipment, which launches the price above $53,000.