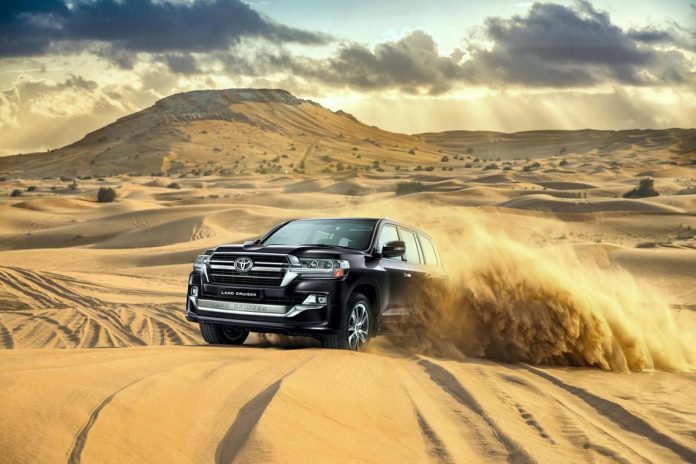 Land Cruiser is the synonym for the luxury. However, slow sales require big changes. The new generation of the SUV will wait for a few years, according to reports. It will show up in 2024. The 2021 Toyota Land Cruiser will be refreshed and possible changes are numerous.

For example, the redesign will make the LC more aggressive. The look of the full-size model is old and it is the first big thing Toyota needs to change. Also, the overhaul of the interior is another important moment of the update. That is not going to be all since we can also see the new drivetrain replacing the V8. It is providing extreme capabilities, but the company wants to deliver something more efficient.

Land Cruiser is the longest-serving nameplate in Toyota’s family. Still, the sales became very poor and the carmaker sold only 3,500 units last year. Yes, an $80,000 investment is a big thing, but for example, Cadillac sold 35,000 Escalades, and 18,000 buyers purchased Range Rover in 2019.

The SUV relies on the proven source of power. Equipped with exceptional features, a V8 is going to take you almost anywhere. The Land Cruiser is the best combination of luxury and utility. But, a 5.7-liter powerplant is consuming too much fuel. This is the main reason why the Japanese carmaker is thinking about the replacement. A V8 is able to produce 380 hp and 400 lb-ft of torque and the new engine, whichever it is, will need to be better in every segment.

The first option is a twin-turbo V6 or even some small V8. A smaller block would be more efficient, but the 2021 Toyota Land Cruiser would lose some of its abilities. Well, we still don’t know how engineers are going to pull it off, but speculations are on the right track.

Some sources claim that Toyota and Subaru are cooperating in new projects. These deals will include the usage of famous Boxer engines by Toyota. However, these are light units and Land Cruiser needs heavy artillery to keep up with the competition

One of the wishes of many LC fans is a diesel unit. The V8 motor is available in Russia and some other markets. However, this one is not likely to appear in the US. Emission standards are out of the reach and the investment would be too expensive for this model. Also, the manufacturer confirmed that the Tundra truck is not getting a diesel engine. Land Cruiser shares the same platform, so it is logical to expect the same outcome.

One of the reasons why we believe in rumors about the redesign is Lexus filling for the new nameplate. Its largest SUV, LX, is dropping the 570 model. Ass you can notice, the number indicates the size of an engine. The new SUV will be Lexus LX600. This is the premium brand owned by Toyota and similar updates are expected for the luxury SUV with the Toyota badge. But, what does the 600 means? Is it a 6.0-liter engine? Or it is indicating the new Lexus LX, and the 2021 Toyota Land Cruiser with it, will get 600 ponies? We will find it out soon.

Everything is old on the Land Cruiser. The latest generation is more than a decade old. Meanwhile, everything evolved very fast and Toyota tried to keep pace with updates. But, no major redesign happened and the LC is no longer among the favorites in the market. Yes, it still offers the best combo of utility and premium materials, but in both segments, you can find better vehicles.

Another downside is the lack of options. The LC is available only in a single trim level. That is something the 2021 Toyota Land Cruiser needs to fix. This eight-seater is capable of some serious off-road drive, and the company needs to turn this into an advantage. The redesign of both interior and exterior will make the SUV aggressive, elegant, modern, and attractive again.

It is now or never. The redesign will show that the company still cares about its full-size luxury SUV. On the other hand, the downfall will continue, and the possible discontinuation is near. Still, we’ve heard that Toyota is preparing new generations of its vehicle, starting with 2022 or 2023 Tundra. The Land Cruiser will wait for a bit longer, and its new version is due for 2024.

Meanwhile, the redesign will keep the attention of buyers. One of the changes we will see overseas is the availability of the V6 hybrid system. It is unclear if the carmaker is going to provide a similar configuration for the US market. The TNGA platform is ready and it could be the future architecture for the Land Cruiser, which will provide the necessary refreshment.

More news from Toyota: New Highlander will get the PHEV engine