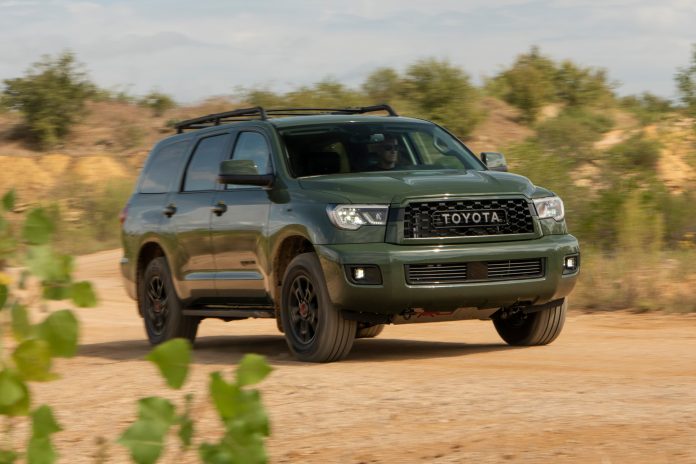 The complete redesign of the largest Toyota’s SUV will have to wait. Either if the COVID-19 outburst has never happened, the all-new Sequoia would appear in 2022. The Japanese carmaker is planning big updates of its big rigs. In the first wave we will see the new Tundra truck and 4Runner SUV. Then, the other vehicles will wait for their turn. Still, the 2021 Toyota Sequoia will get a few new things to make this SUV attractive. A small refresh for 2020 YM brought the TRD Pro version, and the next one will upgrade it further. We also expect new colors, interior, and equipment.

Sequoia is going through a tough time. The full-size segment is not so popular, but it is pretty expensive. Compared to midsize models, they are only more spacious. You have three rows and V8 units in their smaller siblings. Whatsoever, there are still a lot of drivers who love to drive such big vehicles. The Japanese carmaker brought the special TRD Pro model and added Android Auto for the latest version. The new model will upgrade the styling, but it is going to happen when the all-new 2022 Toyota Sequoia steps into the market.

A Lot of Power, High Consumption

Toyota is not saving with this model. It is spacious, so the company can pack a lot of things. The engine room is also included and it offers a huge V8 displacement. A 5.7-liter displacement brings a lot of fun with 380 hp and 400 lb-ft. Toyota also exploits it in the premium segment, on the Land Cruiser and Lexus LX. However, its time has come to the end, and after the 2021 Toyota Sequoia, this nameplate will use a different unit. The I-Force Max is about to debut on the 2022 Tundra, and after than on other models of a similar size.

The main reason for the switch from V8 to V6 is a fuel economy. With 15 mpg, 2021 Toyota Sequoia is at the rock bottom of the segment. Well, we can find Jeep Grand Cherokee with 707 hp which returns a similar mileage. On the other hand, the good thing about the V8 is a superb towing capacity (8,500 lbs). Well, the twin-turbo won’t be too far from this amount, while improving fuel economy.

The TRD Pro package is already available for the largest Toyota’s SUV. We could guess the carmaker is going to expand the TRD Pro lineup to more vehicles. Still, the Sequoia was not among favorites against more popular SUVs. On the other hand, the move has sense, since the off-road model could make the 2021 Toyota Sequoia more popular.

Special equipment is taking place on the new SUV. Buyers will find FOX shocks and a unique exhaust system. Plus, the body is protected with special skid plates and side skirts. The appearance is slightly more aggressive, but the size of the 2021 Toyota Sequoia TRD Pro is still the most dominating element.

Android Auto is now the standard equipment for Toyota vehicles. For a long time, the Japanese manufacturer did not want to let Apple CarPlay and Android Auto take over its infotainment system. Well, the Entune couldn’t keep up with the leading services for smartphone integration. Still, small updates inside should make the SUV more convenient.

The TRD Pro is the most capable model in the lineup. But, the most luxurious one is the 2021 Toyota Sequoia Platinum. You will get leather seats with heating and ventilation. The standard audio system gets a huge boost from the JBL. 14 speakers will provide a surround sound. Still, the performance is also enhanced by air suspension. You can also get a rear-seat entertaining system with large screens in headrests, wireless headphones, as well as the wireless charging.

What’s Next for Sequoia?

Well, the upcoming SUV is not bringing any serious changes. The entire lineup of the big rigs is very old, dating from the first decade of the 21st century. Now, Toyota will trigger the large update all across the lineup, and the first models to get the new look are Tundra truck and 4Runner SUV. First moves are already made – Toyota obtained rights to use the I-Force Max, and this is the new engine for the upcoming large vehicles. The company will start using it in pretty soon, and the 2022 Toyota Sequoia should debut with it and the fresh appearance.

Designers will have enough time to prepare the SUV. The current situation is slowing down the things for the 2021 season. The 2022 Toyota Sequoia will bring a new look after more than 15 years. That is more than a good start. With the latest engine and its technology, we believe the SUV will be able to compete with the updates the Chevy Tahoe and Suburban are bringing. Well, there won’t be a diesel engine in Toyota’s lineup, but a hybrid drivetrain is still possible.