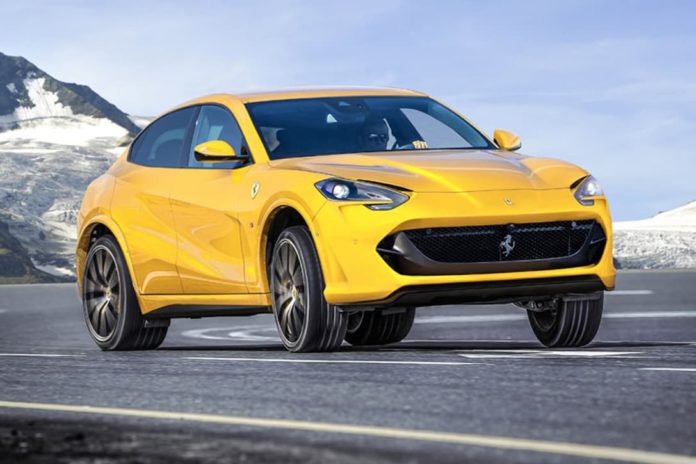 We’ve been waiting for a long time. The Maranello giant is finally entering the SUV segment. The 2022 Ferrari Purosangue is confirmed!

Whatsoever, the carmaker is not unveiling too much. Well, every fan knows what to expect from the Italian manufacturer. This is going to be one of the most exclusive vehicles in the market. The new Purosangue will probably beat the price of the Rolls Royce Cullinan. The first estimations are that Ferrari will slap a $350,000 tag on its new product.

There are a lot of things that make all experts and enthusiasts consider options. For example, the engine. It won’t be easy for the carmaker to make the most powerful SUV. Tesla Model X is above 750 hp and Jeep Grand Cherokee Trackhawk is capable to deliver 707 ponies. It is more likely that Ferrari will take on the Lamborghini Urus and aim for 650 horsepower.

Of course, a quick SUV will set some challenges with its performance. Engineers will try to beat the clock and stop the hand under 4 seconds. If anyone can do it, that is 2022 Ferrari Purosangue. Still, with two more years until its arrival, there is a lot of things to learn about the new exotic SUV.

The first reports we can hear from the company informed us that the platform of the new luxury model will be very flexible. Additionally, trusted sources confirmed the SUV will be able to use V6, V8, and V12 drivetrains. Later, the small displacement was removed from options.

So, we will see the 2022 Ferrari Purosangue with either V8 or V12 powerplant. Engineers will have a new task to create a new unit. Ferrari is not going to modify and adopt some of the existing drivetrains available for its cars. Instead, the fresh source of power will respond better to the needs of the SUV class.

One of the first engines came to our mind is a V12 hybrid. In 2014, the carmaker presented the LaFerrari Hypercar with 950 hp. Still, this output will be downgraded to compete with Lambo Urus and its 640 horsepower. We believe the new 2022 Purosangue is going to settle somewhere between 650 and 700 ponies.

We believe the SUV is going to use a hybrid source of power to maximize outputs and efficiency. Mercedes is already doing it, as well as Porsche. On the other hand, can Ferrari stand out from its conventional build?

There are no patterns in this company. Every model is unique and uses different approaches. The latest example is the styling of the F8 Tributo and Roma models. We cannot find too many similarities. And then, things we know about these exotic cars had to be adapted to the new model, totally different from everything fans saw so far.

One thing is certain – the 2022 Ferrari Purosangue will get the coupe-SUV design. Unique upgrades will make the vehicle different from the competitors. It is still early to consider concepts as something we will see in a year or more when the Italian company brings the first platform for its newest model.

Like the exterior, the interior will also get special treatment. Two abovementioned cars had one thing in common – a seven-inch touchscreen as the center of the infotainment system. We will monitor the situation in next year or so, to see what other vehicles have to offer. Still, everything will be on a higher level, since this is a new market for Ferrari.

During the next half of the year, we will continue to follow the rumors and speculations. The 2022 Ferrari Purosangue SUV could appear early in 2021 but as a model for the following season. Still, even the premiere won’t mean the carmaker immediately launches the vehicle. Fans will have to wait for a few months before the sales start. The limited amount of units will make the Purosangue pretty expensive. If the rumors come true, the SUV is not going to cost under$350,000.