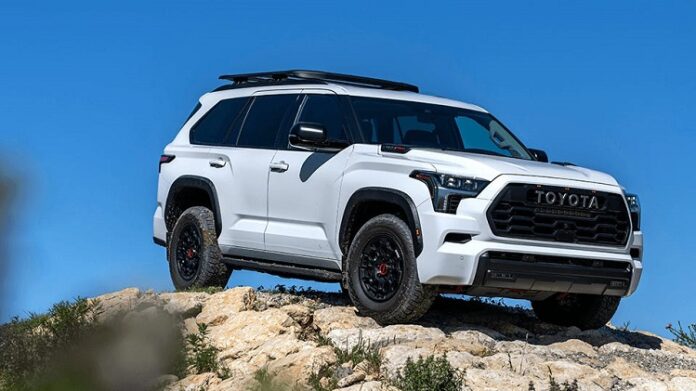 The 2024 Toyota Sequoia is now the only full-size SUV by the Japanese carmaker in the US market. Of course, there is the Lexus LX in the luxury segment. But, we say this because fans got used to the Land Cruiser, the legendary vehicle, which is out of the United States lineup. We already made a review of the all-new Land Cruiser 300 Series. It might be back, but not so soon.

The all-new Sequoia is debuting in 2023. It is not unexpected, with its siblings (Land Cruiser and Lexus LX) having already launched the updated versions. It was not hard to guess that the full-size Toyota SUV is going the same way. Plus, the previous generation was too old. In 15 years, we didn’t see too many big changes on Sequoia. But now, fresh styling is going to draw attention, especially from younger people.

What is more important – the 2024 Toyota Sequoia won’t use a V8 engine. Instead, a new twin-turbo V6 is under the hood. According to the first feedback from Lexus LX and Toyota Tundra, the capabilities of a smaller block are at the same level as the discontinued 5.7-l model. 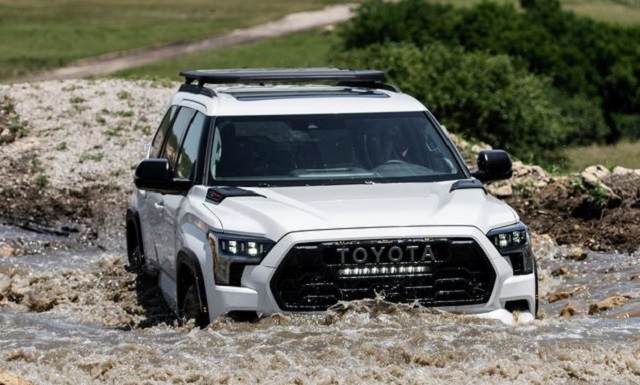 Under the hood of the 2024 Sequoia will be a new configuration. There were many questions about the future of the V8. It was a reliable, powerful, and durable unit. Also, very heavy and thirsty. Another doubt was if a smaller block can match the performance of a 5.7-liter plant. Now, everything is clear – Toyota will go with a turbo-six for all its big rigs.

The new 3.5-l (some say 3.4-l) displacement was introduced on the Tundra truck. We heard about the I-Force technology before, and this is its debut. The twin-turbo V6 mill can deliver 437 hp and 583 lb-ft of torque for the SUV. It is quite an improvement compared to the V8. A new, ten-speed automatic transmission is sending power to the rear or all wheels. The gas mileage is getting an improvement, but the 2024 Toyota Sequoia won’t be a budget-friendly option due to its size and weight. On the other hand, the towing capacity jumps to 9,500 lbs. It would be the best result for an SUV if the Jeep Grand Wagoneer didn’t raise the bar to 9,800 pounds. 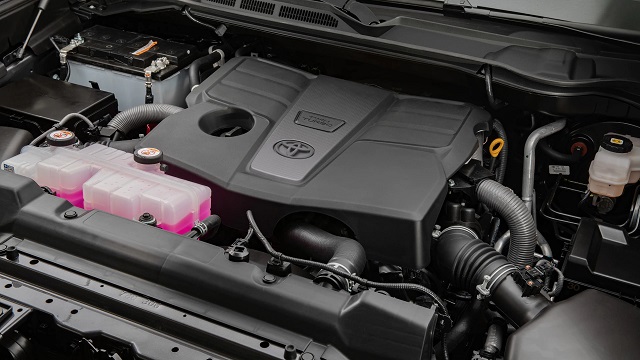 Another big thing for the full-size SUV. The previous edition was around for 15 years and the redesign was supposed to happen much earlier. But, better late than ever. Plus, the new 2024 Toyota Sequoia will have more room after the discontinuation of the Land Cruiser. Designers revisited interior and exterior, making the SUV more aggressive and luxurious. Still, it is not in the premium realm, where the company is represented by the Lexus LX.

Sequoia is built on the new platform. But, it is still a true SUV, since the ladder frame underpins the body. That is why towing capacity is so impressive. However, the drive control and safety are the prices this model is paying for its sturdiness.

The highlight of the vehicle is the TRD Pro package. The Sequoia is the fourth model with this off-road enhancement. But, we expect to see the all-new version in next couple of months. Of course, the 2024 Toyota Sequoia TRD Pro should benefit and become even more capable of driving in extreme situations.

There are three trim levels introduced for the all-new SUV. Besides the base one, the company made the Sequoia available in the Limited and Capstone versions. Both feature the 4×4 as the standard drive. But, the 2024 Toyota Sequoia should bring even more options. We already mentioned the TRD Pro. However, this is the model for off-road adventures, although its interior is pretty spacious and comfortable.

The SUV is a three-row model with a seating capacity for eight persons. Through optional upgrades, you can make it roomier by using captain’s chairs in the middle row. The 2024 Toyota Sequoia Capstone is the new high-end option with premium equipment. For example, the package adds perforated leather, acoustic glass with noise cancelation, premium wooden trims, and advanced infotainment features, including a larger screen and audio with extra speakers. 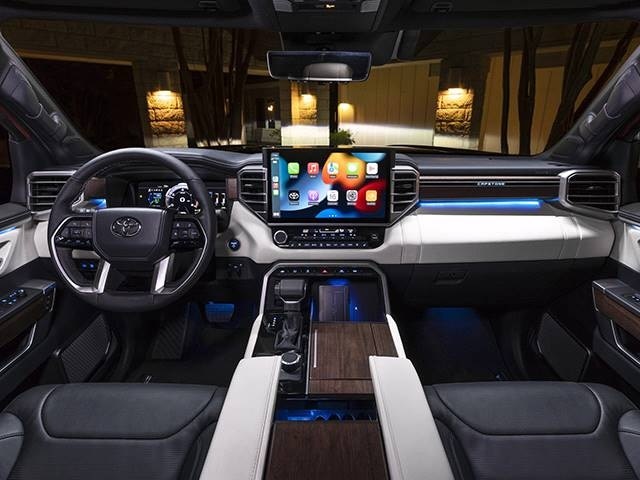 The new price list for the SUV makes it significantly more expensive than its predecessor. But, that is something we see more often, especially in the full-size class. The base MSRP for the 2024 Toyota Sequoia is $58,000. Well, in the past, we could find some luxury models for $65,000. Still, nowadays, the price went through the roof for these vehicles as well. The Capstone model gets close to this realm with the price tag of $78,000. We still don’t know the cost of the 2024 Sequoia TRD Pro. It used to be at the similar level with the premium options. After the redesign of the SUV and revisit of the package, the price might hit $80,000 mark.