Electric vehicles are slowly replacing conventional units with internal combustion. So, we see more EVs on the streets. The first to be sacrificed are models with diesel engines. Those are almost impossible to see anymore. Even Ford discontinued F-150 Diesel after launching the Lightning version, an electric truck. Other companies are going the same way. General Motors already has two big names coming out next year and we will see even more 2023 electric SUVs premieres.

Tesla is quiet for now. Well, the US company is a pioneer in electrification and an undisputed leader in this segment. Model X is out for a while, and the company upgraded the lineup with a more affordable Model Y. In this review, we won’t analyze small crossovers, such as Hyundai Kona, Kia Niro, Nissan Ariya, or Chevy Bolt EUV. Big 2023 electric SUVs are under our attention. 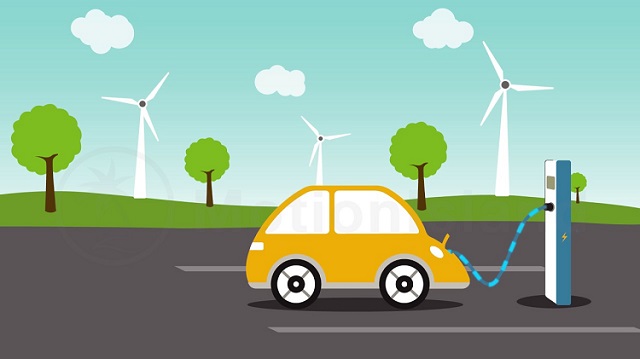 It is hard to decide which one should open this topic. The 2023 GMC Hummer Electric SUV is probably the most interesting name here. The first reason is because it will be a modified version of the electric truck. The pickup is not out yet and we don’t know what kind of features it is going to present. General Motors made a few announcements for now. For example, high-end versions are going to offer something called Crab Walk, which will allow the truck to move diagonally. A cool feature for off-road adventures, but probably expensive.

The 2023 GMC Hummer Electric SUV is going to carry over drivetrains from its close sibling. Actually, we believe that body transformation will be the major change. All other features and options will remain the same. Nevertheless, it will be cool to see the Hummer back on the streets once again. The first edition of the vehicle will have a range of 330 miles. Still, the entry-level model is for showing off, so expect more affordable units in 2024, with reduced range and specs.

One of the vehicles we’ve been expecting eagerly. The 2023 Rivian R1S is finally entering production. Like Hummer, there will be a truck version as well. Again, the electric pickup was used as a lure for buyers, and the SUV is something like a bonus. For some while, Rivian was considered as the main rival to Tesla. But, it’s been a few years since the project was introduced. Back then, the prototype of the R1T stunned the world. Soon, the company expanded the lineup to the electric SUV segment, but the production was delayed.

According to sources, the vehicle we’ll see at dealerships will get a 135-kWh battery. It will be enough for the range of 315 horsepower. Fast chargers can restore 140 miles of range in just 20 mins. High-end models can sprint 0-60 mph in just 3 seconds. Those are a few reasons why many considered the 2023 Rivian R1S a rival to Tesla Model X.

One of the legendary models is becoming one of the 2023 Electric SUVs. We got used to seeing Wrangler in the dust and mud, but the EV version is something that stuns even the hard-core enthusiasts. But, the FCA is following modern trends and they announced the next step in the evolution – after the 4xe model, we will see the 2023 Jeep Wrangler Magneto.

Specs are not unveiled yet, but there are speculations. Jeep will be after Ford Mustang Mach-E, which means a similar specs sheet is coming. Nevertheless, there are plenty of details fans want to know. First of all – will the 2023 Jeep Wrangler Magneto keep the capabilities of the regular version? Also, there are no indications about the price and range. So, experts believe this is just a game by the FCA, but still, we can’t write this model off. If it happens, it is definitely stealing the show from other vehicles on this list.

When Mercedes is into something, they aim to be the best. One of the companies that never fail to impress is now working on electric models. That will be the 2023 Mercedes EQ Class and the first vehicle to get into production is EQB. In the future, expect bigger and more powerful units. We can’t wait to see the EQE or EQS. Mercedes is already on a good way, with exceptional plug-in hybrids as the final step towards complete electrification.

There are a few things we know about the 2023 Mercedes EQ Class. For now, the company announced three models, EQB, EQE and EQS. The focus is on three things – safety, technology and performance. Synchronous motors guarantee efficiency. Those are lightweight units with great capacity. Hyperscreen is the latest stunning feature for the MBUX infotainment. It is a 56-inch curved display stretching from door to door. Finally, the best performance is coming thanks to Li-Ion batteries. All in all, it will be worth waiting the 2023 Mercedes EQ Class. 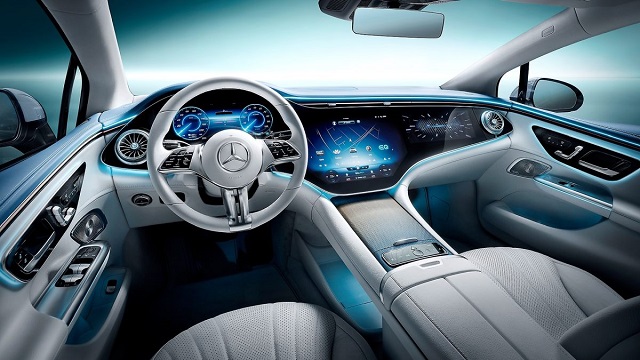 The 2023 Cadillac Lyriq is another model whose debut fans expect eagerly. Well, this concept is older than Hummer, but it doesn’t draw the same amount of attention. But, it should be. This platform is going to underpin all the future SUVs in the family. Escalade IQL is currently one of the hottest rumors, although the company is not announcing the large model as the part of 2023 electric SUVs family. But, Lyriq will be there.

The SUV will be 197 inches long with a 122-inch wheelbase. Electric motors will generate 340 hp and experts assume that RWD and AWD are the options for the 2023 Cadillac Lyriq. Since it belongs to the premium brand, fans can expect a higher price, probably starting at around $60,000. On the other hand, buyers expect a premium approach by Cadillac and some of the advanced features right from the base model, such as SuperCruise autonomous drive system.

Macan EV was one of the first confirmed models for the 2023 electric SUVs lineup. And the German company is on a good way to deliver it on time. Test mules are being on the roads for some while, confirming rumors that Porsche is entering the new class. It is not a surprise, since the carmaker made a huge move by entering the SUV segment with the Cayenne. Now, they are building a legacy and following modern trends.

The 2023 Porsche Macan EV is going to cost at least $80,000. Of course, the carmaker is going to add some of its trademark packages. Experts predict Macan S and Macan GTS to join the lineup. High-end versions will be priced over $100k. expectations are high, especially in the performance section. The coupe SUV will look aggressive, which will follow a super-SUV nature of the specs sheet. 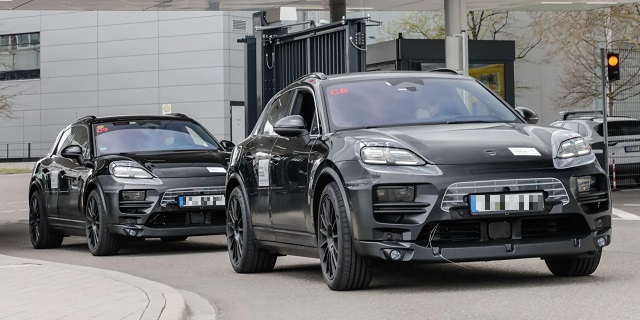 The Recharge version of the XC60 SUV is already out…but as a PHEV system. It was a disappointment, having in mind that the same badge is used for the small XC40. Nevertheless, Volvo is working on upgrades and the XC60 is getting the EV version, becoming part of the 2023 electric SUVs lineup. The Swedish company is still hiding details, but we can get some indications from the Polestar section.

For now, the 2023 Volvo Polestar 3 is more likely to happen. With a range of 300 miles, it will be enough to become pretty competitive in the 2023 electric SUVs market. Interesting, the infotainment system will be Android-based. We doubt that the company will miss adding IOS services as well. The production starts this fall and the first units will be available at dealerships next year. The estimated price of the 2023 Volvo Polestar 3 is $60,000.

Audi is completing its lineup of Q1-Q9 vehicles. The 2023 Audi E-Tron Q4 is the latest piece of the puzzle and the first electric SUV we’ll see in the future. More is yet to come, but in the upcoming season, the Q4 is the only EV. A lithium-ion battery is going to provide only 200 horsepower, but it will be enough to make this model sprint 0-60 mph in 7 seconds. The base model is not as impressive as some other 2023 electric SUVs we mentioned here, but the price is going to be more affordable.

The range of the 2023 Audi E-Tron Q4 is 240 miles. The recharge system can top up 80 percent battery in half an hour. The full restore depends on the system you use. Audi didn’t announce further versions, but we are somehow sure there will be either SQ4 or RS Q4 available as well, with more potent E-Tron technology. 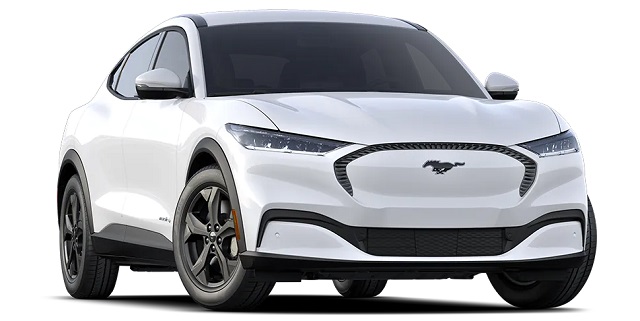 The first electric SUV by Ford was recently launched, so we don’t expect too many changes on the upcoming version. The 2023 Ford Mustang Mach-E will be quite affordable. The Blue Oval company makes it available for $44,000. The GT version is going to deliver the best performance. Of course, this model is significantly more expensive. Still, experts believe it will be a good investment.

More important about Mach-E is Ford’s introduction to the electric class. Now, there is already the F-150 Lightning truck available. The future brings more 2023 electric SUVs. In the next few years, the Blue Oval badge is going to be on grilles of more than 15 models.