Electric vehicles are the future of the automotive industry. So, there is no surprise why we see new models every year. The segment is expanding and we are going to pick the best of the best. The list is going to cause controversies since we had to narrow the selection to only five models. It was not easy, but here are our favorites.

Of course, the range is probably one of the decisive factors. But, it is not the only, no matter how important it is. Performance, comfort, and price always matter, even when we talk about conventional units. So, let’s start. 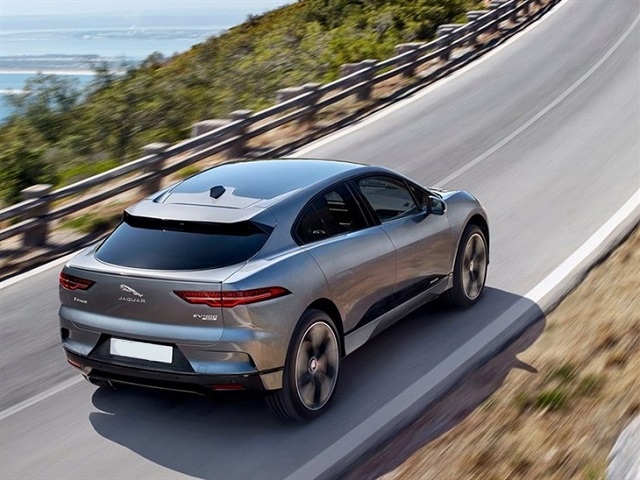 Jaguar made a stunning move in 2018 when the British company decided to launch an all-electric SUV. The I-Pace immediately drew the attention, bot for the motor and styling. Of course, JLR added special luxury spice to the new Jag. The 2023 Jaguar i-Pace is a 184-inch long coupe SUV. It is going to belong to the compact class.

The drivetrain system holds a pair of electric batteries. Total power is 90 kWh and the package is going to create 394 horsepower and 512 lb-ft of torque. Fully charged, batteries will hold for 234 miles. The 2023 Jaguar i-Pace needs 4.5 seconds to hit 60 mph from zero. Max speed is 125 mph. The company is working on the recharging system since the current version needs 13 hours.

As you can expect, the 2023 Jaguar i-Pace is a bit pricey. The electric technology is still expensive and the MSRP is showing that, starting at $70,000. Of course, the luxury brand brings a lot of advanced systems on this SUV. Driving dynamics are exceptional. Jaguar will have to improve a few things. For example, the vehicle dates back from 2018, and newer vehicles are now available. 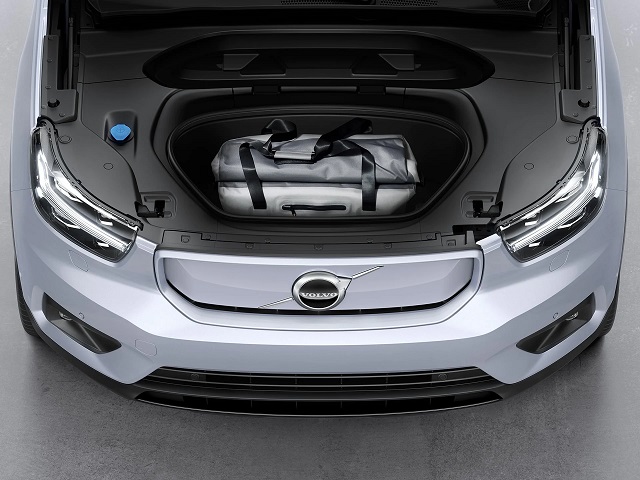 The 2023 Volvo XC40 Recharge is a new vehicle. Expectations are high from the first-ever electric SUV by Swedish carmaker. They will expand the lineup. However, the Recharge package for the bigger XC60 is using PHEV, not an all-electric system. Volvo’s styling will definitely match the offer of the Jaguar i-Pace. But, the XC40 Recharge is newer.

The EV can produce 402 hp and 486 lb-ft of torque. The battery used for that is a 78-kWh unit. The estimated range of the fully-charged vehicle is 208 miles. The power produced by an electric motor is distributed to all wheels. The 0-60 acceleration time is 4.2 seconds, which is 2 seconds faster than standard XC40 can sprint. Fast chargers will restore 50 miles per hour plugged in, which means the 2023 Volvo XC40 Recharge will need about 4-5 hours to charge the unit.

Again, another premium brand jumped into the EV world. That means – high price. The 2023 Volvo XC40 Recharge will cost $54,000 and this is one of the main reasons why we are putting it before i-Pace. Nevertheless, the SUV is going to offer higher trim levels. Twin Plus and Twin Pro have announced packages for the XC40 Recharge. 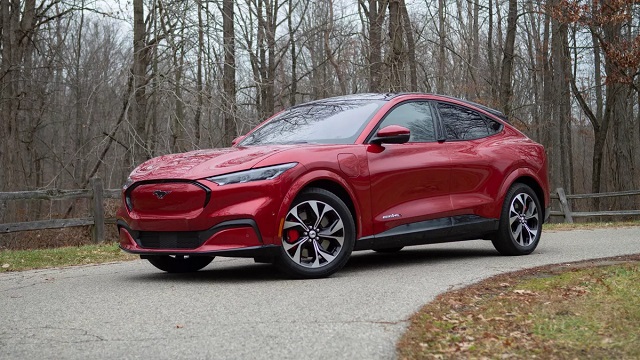 Ford took some time and the Blue Oval company is finally in the electric world. The US carmaker debuts with the Mustang-based SUV called 2023 Ford Mach E. We’ve heard about the return of the famous Mach model, but we expected a high-end package for the pony car. Fans were waiting for a long time to see a rival to Tesla. We’ll see if Ford can break the supremacy of another US carmaker. For now, the Mach E is good for the No 3 spot in our list.

Two different batteries will deliver power for the EV. Engineers tune them to return 210-300 miles. Both motors can send power to the rear or all wheels. A 66 kWh unit comes in Select and Premium packages. With the RWD, the SUV travels 230 miles, while the AWD costs 20 miles of range. On the other hand, all-wheel drive will make the 2023 Ford Mach E go faster – 5.2 seconds for 0-60 mph sprint, half of the second faster than the RWD. The best thing about this SUV is its price, starting from $42,000.

For a larger battery, 88 kWh, you will have to spend more. The base version is going to cost $50,000, while the high-end GT performance edition adds $10,000. The range of the RWD configuration will reach 300 miles. The GT is the fastest setup, being able to accelerate 0-60 mph in 3.5 seconds and a max output of 480 hp. Expectations from Mach E are huge. We’ll see if the EV is going to be as famous as its close sibling, Ford Mustang. 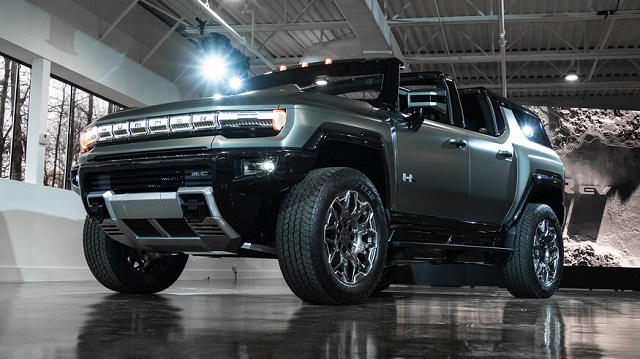 It is not in production yet, but we place it at No 2. General Motors is opening a new chapter. It is obvious that the company was slowing down. GM didn’t even have hybrid models in their offer. And all of the sudden, they announced the “Our electric future is now” plan. Hummer electric truck drew the most attention for sure. But, Cadillac Lyriq and Chevy Bolt are also worthy of mention. But, soon after the pickup, we will see the 2023 GMC Hummer SUV.

According to sources, the company is not in doubt about the conversion. GM introduced radical features that will stun the market. Crab Walk allows the Hummer to move diagonally. The Extract Mode is a dream of all off-road fans. Just imagine – you run onto the obstacle, and your ride can gain extra ground clearance, making the pass easier. Those are just some of the options the 2023 GMC Hummer SUV is going to take from the electric truck.

The bad thing is – those are high-end features that will make the price go up through the roof. Well, everything about the Hummer is still looking far-fetched. For example, the company announced a three-motor version with a total output of 1,000 hp and 11,500 lb-ft. Converted to conventional outputs, it is still too much. Experts say the torque won’t be higher than 800 pound-feet.

Again, recharge times are also boosted. Reportedly, the special system is in the final phases of development, and it will restore 100 miles of range every 10 minutes. One of the things that we already see dominating the market is the SuperCruise driver aid package. In the future, it could beat all the existing autonomous drives. 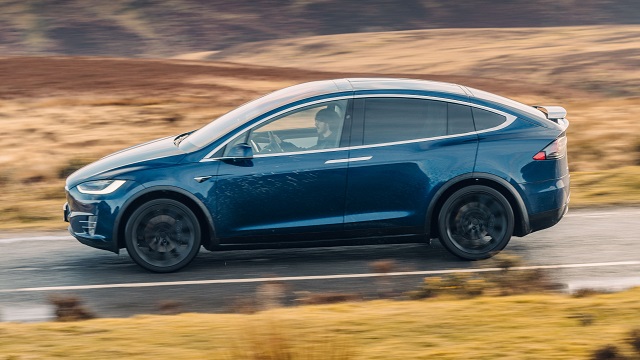 The Hummer SUV is spectacular. If GM delivers promise, then their model could be called a rival to the 2023 Tesla Model X. The oldest SUV is still the most impressive vehicle in the electric segment. Tesla delivered a budget-friendly version, Model Y. But, its price represents how much you should lower the expectations.

The 2023 Tesla Model X is the most powerful SUV in the world with up to 760 hp in its best outfit. Even the base model is impressive with 3.8-sec 0-60 sprint time. The 2023 Tesla Model X P100D stops the clock after only 2.5 seconds. Even the performance of SUVs by exotic carmakers can’t beat that. On the other hand, the price will probably be the stumbling block for most buyers. The SUV costs $90,000 in the standard-range configuration.

The base model is going to cover 250 miles in a single charge. The Long Range version adds 90 miles. Tesla’s autonomous drive is currently the best in the world. But, the company will have to think about upgrades, since a few companies promised Level 4. We can also expect recharging times to drop for the 2023 Tesla Model X.