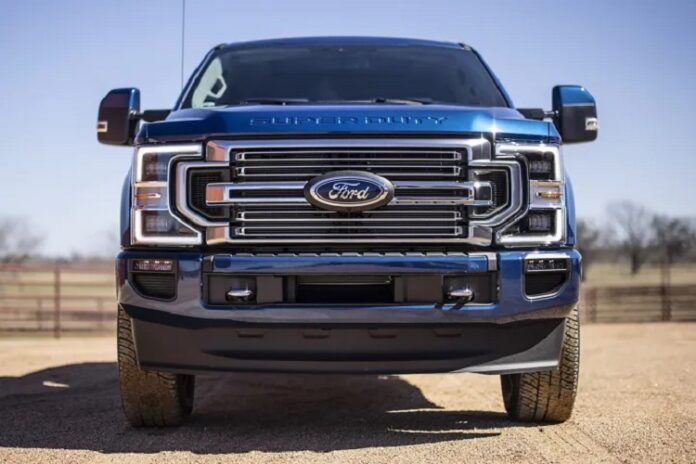 Why we are still talking about the 2023 Ford Excursion? It seems like the Blue Oval carmaker is never going to build it again. But, how can we be sure? The SUV segment is expanding in all directions. Nowadays, we have different breeds of those vehicles, with numerous purposes. The heavy-duty SUV would be a nice addition. Excursion can sit above Expedition Max, as the largest vehicle.

Another reason why Ford is going to reconsider the comeback is a speculation about the Chevy Suburban HD. So, General Motors is up to something and Ford has to respond. Excursion is a perfect choice and it adds something else. Once, SUVs were threatening to destroy the mid-size pickup class with their versatility, especially towing capability. So, the HD model could take on the Chevy Silverado and Ram 1500 as well.

Surprise, surprise. Ford prepared the pitch for the upcoming vehicle. A 7.3-liter Godzilla V8 engine is the perfect choice for the Excursion. The company created the powerplant and installed it in the heavy-duty truck segment. It is replacing an old unit and delivers 430 hp and 475 lb-ft. Plus, towing capacity is improved. That is everything the 2023 Ford Excursion needs. With a proper tuning, the engine will fit the heavy-duty SUV. A ten-speed automatic transmission is going to be standard with the rear-wheel drive. Of course, a four-wheel drive will also be there.

With the petrol engine coming from the Super Duty class, we must think about other possibilities. The HD trucks are also using the Powerstroke oil burner. However, a massive turbodiesel seems to be too much for the 2023 Ford Excursion. For example, it can crack 450 hp and more than 1,000 pound-feet of torque. Even downpowered, this is too much for the SUV. For trucks, such outputs have a purpose. The towing capacity of high-end versions is above 35,000 pounds. The SUV is not going to offer more than 15,000 lbs.

The 2023 Ford Excursion will be a heavy-duty SUV, but totally different than its predecessor. The nameplate was available at dealerships from 2000 through 2006. But, its size and high fuel consumption were the main reason for the discontinuation. The Excursion was 226 inches long. The new model will also be somewhere between 225-230 in. The truck-based SUV can find inspiration in the new F-250 and F-350 Super Duty models. It guarantees bold look and modern design.

Inside the cockpit, we expect a lot of space. The 2023 Ford Excursion interior is going to use a three-row layout. The question is how many persons it can accommodate. Probably eight. The Expedition starts with that configuration as well. The new safety equipment and SYNC infotainment system are going to draw more customers. We will see what kind of trim levels Ford is going to use. Limited and Platinum versions should sit at the top of the lineup.

Two companies are ready to take their battle to the new classes. However, both the 2023 Chevrolet Suburban HD and Ford Excursion are still just rumors. If any of the rivals make a move, the other one will be ready to react. The question is – what kind of an engine the Suburban HD could use to compete with a huge 7.3-liter V8? General Motors also updated the petrol lineup for Silverado 2500 and 3500 models. Still, a 6.6-liter V8 is not as capable as the Godzilla unit. But, it can serve the heavy-duty SUV and bring something different compared to the regular Suburban.

All the speculations about the 2023 Ford Excursion are based on rumors. But, such clues are telling that the comeback is not impossible. Being based on the existing vehicle, with the perfect engine ready to jump in is a kick start. Of course, there is a lot of work to be done. Ford can do it. The major question if the market is ready for the heavy-duty SUV. Back in early 2000s, the company managed to sell about 200k units through a seven-year span. Nowadays, Ford is selling more than 100,000 full-size SUVs per year, including the premium Lincoln Navigator. So, it is the perfect moment to think about the expansion of the lineup.