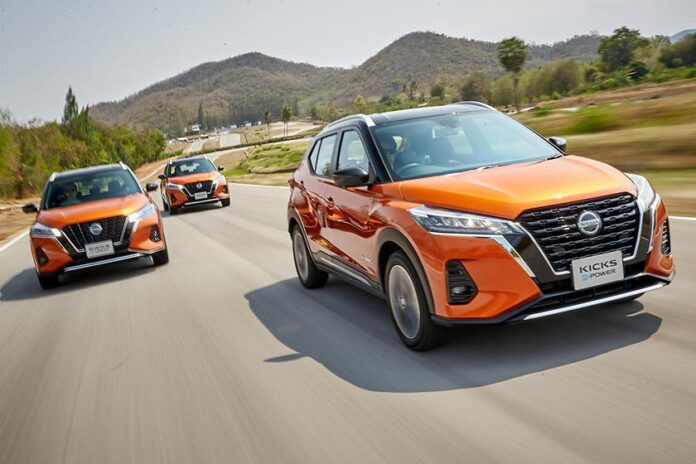 The 2021 Nissan Kicks is the smallest crossover in the US. The vehicle replaced Juke, which is still in production for the European market. The new Kicks is going to be refreshed for the first time, according to reports from Japan, where the same nameplate is used for the subcompact model. A minor update will prepare the vehicle for the upcoming challenges.

Even after the facelift, the 2021 Kicks will cost under $20,000. It is also one of the most affordable models in its segment. There are no too many other companies offering its crossovers at a similar price. A four-cylinder remains the only option under the hood. No hybrid version is coming, Nismo is gone with the Juke, and the only drive type is the FWD. Even without too many options, Kicks is one of the best models for rookies and beginners.

Because of its dimensions, the 2021 Nissan Kicks is perfect for an urban drive. Parking at tight lots is not a problem for the crossover and the gas mileage is excellent, even for this class. On the other hand, if you have a larger family and you love to spend weekends outside the town, then something bigger for storage and more powerful for a more comfortable ride will be better.

Changes for the 2021 Nissan Kicks

The 2021 Kicks is new for the upcoming season. The mid-cycle update brings the most changes to the front fascia. Grille and slimmer headlights are the first things you will notice. Also, taillights are new, as well as the wheels set. Although the company introduced the model in Thailand and Japan, we believe that the US version will also feature most of these modifications. The interior is using the latest language and the crossover is available in 13 different colors. Currently, there are 11 paintjobs, and the most interesting are schemes with a contrasting roof. Black top can be combined with white, orange, or red, while other combinations include orange/silver and blue/white.

Dimensions of the 2021 Nissan Kicks will be the same. The company fitted Rogue Sport between this model and compact Rogue, as the match to the popular European crossover Qashqai. Kicks is 169 inches long, with a 102-in wheelbase. Total weight is between 2,450 and 2,560 pounds, depending on the equipment. The new version for the Asian market features the e-Power drivetrain, which makes it even heavier. Nevertheless, this one is not coming to US shores next season.

The main source of power for the subcompact crossover is the same. We expected new options, but the offer remains at a 1.6-liter four-pot unit. The vehicle gets 122 hp and 116 lb-ft of torque, which is less than most rivals can do. Still, power outputs and punchy acceleration is not something why we are buying the subcompact vehicle. Instead, the fuel economy and agility are for praising. Kicks returns 31/36 mpg. This is almost at the same levels as the Rogue hybrid can offer.

The new version presented in Thailand featured the e-Power system. A 1.2-liter three-cylinder engine is combined with an electric battery and returns 127 horsepower and 190 lb-ft of torque. This will boost the impression, but the setup might become part of the offer in the US only in 2022. The PHEV crossover comes with three drive modes and one of them is all-electric. The batter can cover about 25 miles of the drive.

That is not all about the new 2021 Nissan Kicks. It also enhances the self-driving through the ProPilot package. It is a semi-autonomous system that will offer you lane keep assist and speed regulation features. Emergency braking is also included. In the future, Nissan promised Level 4 of autonomous drive. Well, no other company is offering Level 3, but the difference in the two levels is minor.

While the 2021 Nissan Kicks is already presented in Asia, we expect the confirmation of these changes for the US model. IT will happen in the last quarter of the year. Nissan USA could make some surprising changes for its version. One thing is sure – the base price remains under $20,000 Since there are no drivetrain upgrades, buyers can make the Kicks more expensive through different packages. SV and SR are available, and each of them adds about $1,700 to the previous price. The situation could change if the Nismo model joins the squad. In that case, the price might go up to $30,000.

Although the subcompact crossover segment is not too popular, most companies are present here. Main rivals to 2021 Nissan Kicks are Honda HR-V and Toyota C-HR, while the US carmaker are the selling most units per year. Jeep Renegade and Chevy Trax are leaders, while Ford is considering the replacement for EcoSport. Hyundai Kona and Kia Niro are growing fast. If you want more luxury, then the Lexus UX, Volvo XC40, or BMW X1 are good solutions.