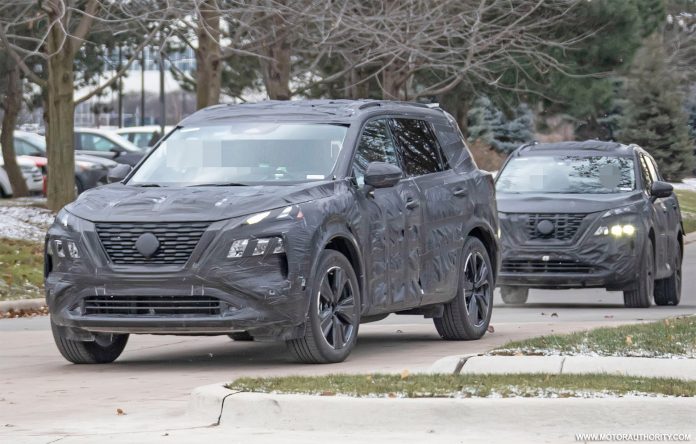 The fourth generation of the compact crossover debuts with the 2021 Nissan X-Trail. The vehicle is the European equivalent to Rogue, one of the most popular models in the USA. Well, the X-Trail is also available in a few other big markets (China, Japan, Australia). The all-new model is part of the new generation. The first crossover was launched at the beginning of the third millennium. So far, we saw three series, with every next edition bringing a lot of upgrades. The 2021 YM won’t lack surprises.

There are a lot of things we already know at this point. But, there are even more details that will be unveiled at the premiere. The 2021 Nissan X-Trail will be one of the best 4×4 crossovers outside the US. Well, its off-road capability made it so popular. One of the most impressive things about the new arrival is the concept. However, leaked images won’t be the same as the production version. Plus, we already saw the new Rogue on spy shots. Fans like the changes, but even the test mule is not unveiling too much. One of the biggest mysteries is the engine room. We can bet the X-Trail is getting a very efficient hybrid drivetrain.

The redesign of the 2021 Nissan X-Trail is one of the biggest things that will happen on this crossover. The fresh look should draw more attention and lure younger buyers. It is not easy to do, but the Japanese company is well known for its innovations. Their lineup is pretty wide and you can find almost anything you imagine.

The new look will have to meet a lot of criteria. First of all, the crossover must stay durable and ready to respond to off-road challenges. Plus, the interior is taking a heavy overhaul, according to spy photos of the Nissan Rogue. Well, its international sibling will get different styling as well. However, two vehicles are not going to be the same, but the similarities will be obvious.

We can bet that two drivetrains will be part of the lineup when the new generation steps into the market. The first one is a 1.3-liter four-cylinder unit. Unfortunately, this one is available only in Europe, and it will stay so. The output of the engine is between 140 and 160 horsepower and the latest powertrain by Nissan engineers is capable to deliver 180 lb-ft of torque. Still, a single powerplant choice is not a good plan. We are sure that the Japanese company will add another option. Currently, the best chances are for 1.6 or 2.5 units.

The second safe bet is a hybrid drivetrain. The current version is using a 2.0-liter petrol engine as the main source of energy. It is not so bad, but 2021 Nissan X-Trail will have to catch up with the major rivals – Honda CR-V and Toyota Rav4. Both of them are offering very efficient systems that return best fuel economy numbers in the class. Still, we cannot underestimate the third Japanese giant. The X-Trail Hybrid will return more than 40 mpg, converted to the US units.

The drive capabilities of the X-Trail made it so famous. Not only that vehicle is efficient on the road, but also off the asphalt. Still, the performance depends on drivetrains. Besides that, special packages and upgrades are going to boost the skills of the upcoming model. First of all, there is the 4×4 drive. The intelligent system will become even smarter. Automatic mode will recognize the surface and send power to axle that needs it the most. Not only that function is solving obstacles, but also saves a lot of fuel.

When Will 2021 Nissan X-Trail Be Available?

The 2021 Nissan X-Trail is still in development. The company gave us only pieces of information, but the full data is going to be available when the crossover shows up in markets. Well, it is not going to happen in the next few months. The situation with the coronavirus pandemic hit the automotive industry very hard. Companies will need some time to recover. Early in 2021, we could see the debut. Since X-Trail is one of the best-selling vehicles, we expect it at a big car show.