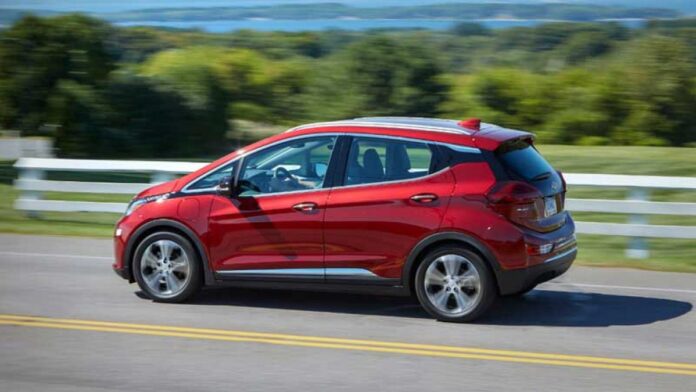 The pandemic didn’t stop General Motors from preparing the debut of its fully-electric crossover, 2022 Chevy Bolt EUV. The company unveiled a few more details about the upcoming vehicle. Now we know what to expect from the small electric model, which will replace the only EV in the lineup. Bolt is growing and becoming the crossover. GM hopes that the new vehicle is going to maintain the popularity of its predecessor.

The 2022 Chevy Bolt EUV is not going to have too many rivals when it arrives. However, all other leading carmakers are going to deliver electric models sooner or later. The future of the automotive world is in hybrid and all-electric motors with zero emissions. Bolt is evolving to the class which is currently the most popular in the market.

This is the first official appearance after General Motors announced that their electric future is now. We already heard rumors about the Hummer EV, and the luxury brand Cadillac unveiled the Lyriq concept. Well, for the company that is not so active in a hybrid market, this is a huge leap directly into the new world.

The most recent information about the 2022 Chevy Bolt EUV is delivering details about the battery and its range. Unfortunately, rumors came true and the crossover will use the same motor like its hatchback sibling. Still, a 66 kWh unit is pretty capable and can run 259 miles. The electric utility vehicle (EUV) will be larger and heavier, so we can expect a drop in range.

On the other hand, the company announced a few new technologies which could save energy. First of all, there is a new platform – BEV3. It comes alongside the Ultium battery technology, which was introduced at the same time as the Bolt EUV. The good thing about the new system is that pack can stretch between 50-200 kWh. Top of the lineup outputs will deliver a range of 400 miles. Well, we expect such configurations for larger vehicles, such as the new Hummer EV or Cadillac Lyriq. In this case, the battery will make these models sprint 0-60 in just three seconds.

The 2022 Chevy Bolt EUV will upgrade the hatchback if you compare the recharging system. The crossover is getting a Level 2 charger, but with more power. That means faster refueling thanks to an 11-kW inverter. The hatchback is doing it slower with a 7.2-kW unit. Still, the improved system is not going to be a rival to Tesla and Hyundai outputs. The Korean company can do 72 kW, while the segment leader can put out up to 200 kW. Still, standard stations are not getting so much power.

General Motors didn’t estimate times. However, the quick charge will take less than 15 minutes for the range that could take you home, where you will have more time for recharging. Also, the car will need less time than Bolt EV to reach 80 percent. Home outlets will be the slowest. For the hatchback, this one can bring back 4 miles every minute, meaning the complete recharge takes 60 hours. Level 1 speeds up things to 9.5 hours, while the super-fast system needs about 75 minutes. We expect similar times for the 2022 Chevy Bolt EUV since the battery is larger, but the system is upgraded.

The US carmaker is very optimistic. General Motors plans to launch more electric vehicles in the next three years. The 2022 Chevy Bolt EUV will be the first one to arrive at dealerships. Not unexpected, since it is one of the smallest. The company already developed the new concept – BEV3 architecture with Ultium battery technology.

The promising start should result in a vehicle that is larger than the existing Bolt EV. According to reports, the EUV will gain three inches of length, which will be used for improvements of the interior room and cargo. The new Bolt crossover is going to be a five-seater. All-wheel drive is not an option for the initial release. But, compared to Bolt EV, the crossover is going to use only the FWD system.

The 2022 Chevy Bolt EUV should also get some level of the autonomous drive. Speculations are reporting about Level 2. Currently, the most advanced system is 2+ by Tesla. However, some companies announced to jump to Level 4. Engineers plan to add the Super Cruise SAE technology, which is currently available only for Cadillac models. There are no doubts the same upgraded system is coming for the new Lyriq, but also 20 more models with different badges within the company.

The 2022 Chevy Bolt EUV will be the first electric model by GM. We could see the premiere early next year, with pre-order starting immediately. Nevertheless, production will start in mid-2021. The price will be higher than for the Bolt EV, which costs no less than $38,000. Still, buyers are eligible for various discounts and tax credits. General Motors will also include a 10-year warranty.