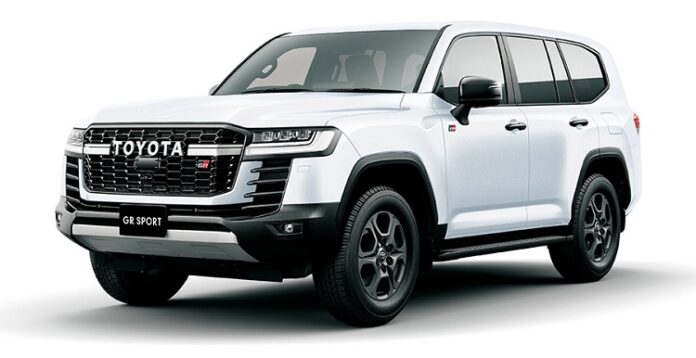 The Japanese company presented the next-gen SUV. However, the bad thing is – we still don’t know if it comes to the US. According to multiple sources, the carmaker is going to make more room for Lexus LX 600. That means the 2023 Toyota Land Cruiser will be cut from the lineup. Not a surprise, having in mind that both Toyota’s luxury SUVs achieved poor sales in the past few seasons. For reason – both were more than 10 years old. Now, when the Land Cruiser receives a big treatment, we won’t see it at dealerships.

The longest-serving nameplate in the family is already in the market for more than 80 years. It will still be available in Japan, Europe, Australia. But, what makes the LC so special, is its combination of luxury and utility. Toyota started closing the gap in the mid-80s. By now, more companies adopted this recipe. Fans loved the level of luxury the Land Cruiser is offering. Plus, the off-road performance was magnificent.

Now, the new 2023 Toyota Land Cruiser 300 is new, but old feats are still there – the SUV is going to take you to the destination, safely, over any obstacle. The company is keeping reliability and durability as the main characteristics that will sell the new model.

The 2023 Toyota Land Cruiser 300 is finally here. We can find tons of reports that the company is working on the next-gen SUV. Well, it was about the time, since the old model, Land Cruiser 200, was a veteran in the market with 15 seasons at dealerships. It was one of the reasons why the sales slowed down. Buyers had enough. The new platform underpins the LC. The GA-F is based on the popular and widespread TNGA architecture. The highlight of the upcoming platform is the lightweight design that will save 440 pounds! The company promises it won’t harm safety, while the updated ladder frame is going to improve ride comfort.

More aluminum will be used for body parts. Plus, the engine displacement moves from the position we used to see in the past 15 years. It will improve the ride on and off the road. But, not only the lightweight body deserves praise. The new suspension is there with a special setup and optimized position of rear shocks. Owners of old Land Cruisers will notice how wheels stick to the ground, even when braking. The new system is called Linear Solenoid Adaptive Variable Suspension, and it is going to be available at higher trim levels – ZR and GR Sport. Nevertheless, the US model had no such options. 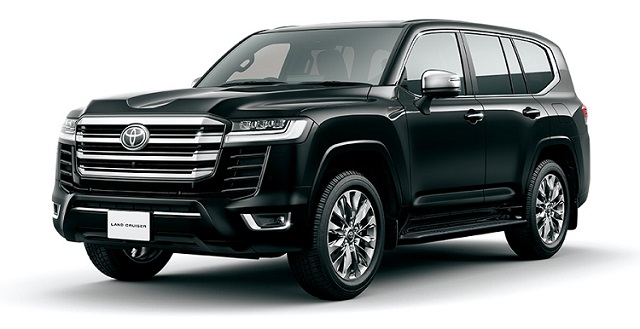 It was never questionable. Now, with the hydraulic power steering, it is at another level. The 2023 Toyota Land Cruiser combines the system with an electric steering actuator. The goal was to deliver better maneuvering skills at lower speeds and cut kickbacks off the road. Braking force is being controlled by the ECB. Torsen Limited Slip Differential promises superb traction, especially at the back. Torque is being distributed optimally to the front/rear and left/right wheel. When you hit the tough roads, Multi-Terrain Select will enhance the performance in dirt, sand, mud, snow, or rocky paths. Sensors will detect the terrain when you use Auto Mode. 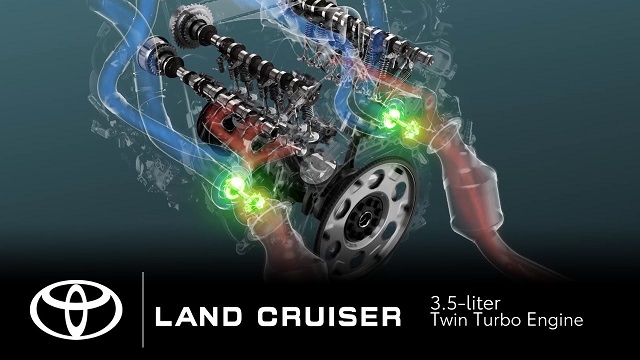 As expected, the new 2023 Toyota Land Cruiser 300 is going to drop a V8 engine. For a long time, a 5.7-liter unit was a reliable partner and one of the main reasons why the LC was so popular. But, Toyota is following modern trends, and the main one is using downsized engines that keep high power outputs. For the 2023 Land Cruiser, a 3.5-liter turbo-six is going to provide 415 horsepower and 480 lb-ft. We’ll see if a V6 can replace the capability of an eight-pot mill. Engineers enhanced injection, stroke, and valve positioning, which should eventually boost the supercharger response at low speeds. Nevertheless, the main additional upgrade is a 10-speed automatic gearbox. Shorter gear steps promise better gas mileage and acceleration. We still don’t know the precise mpg rating, but it will definitely beat 15 miles per gallon a V8 was returning.

Under the hood of European and Japanese versions of the 2023 Toyota Land Cruiser will be a diesel unit. The company sticks to the proven recipe since buyers in some regions are fans of oil burners. A 3.3-liter V6 replaces a big V8. The twin-turbo system enhances and the LC 300 is going to deliver 310 hp and 515 pound-feet of torque (700 Nm). Plus, the diesel configuration will be more efficient than the petrol unit. On the other hand, maintenance costs are higher. The system promises crazy acceleration, both at high and low speeds.

As said, we could hear whispers that the 2023 Toyota Land Cruiser 300 won’t be available in the US. The focus is on the Lexus LX 600 and it will take over the flagship position from the LC. The premiere of the luxury SUV is planned for the second half of 2022.