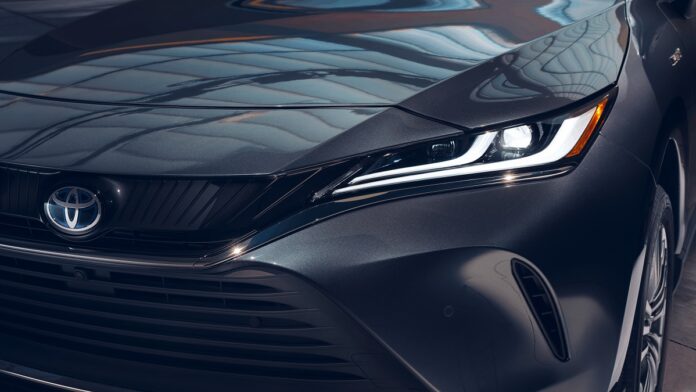 Toyota Venza is back. A few years ago, the company hinted its engineers are working on the return. Still, the concept we saw then has nothing to do with the new model. The 2021 Toyota Venza will be based on the vehicle we can find in the Japanese market – Harrier. It takes the position between the best-selling Rav4 crossover and Highlander SUV. The mid-size two-row model completes the lineup of the Japanese carmaker in the US.

As we already mentioned, the old concept is not going to be in production. The company planned a vehicle which will be all-electric, with solar panels that will recharge the battery. But, the 2021 Toyota Venza is not using a conventional drivetrain. The crossover is going to be available only as a hybrid. We will see what does the future brings and if the 2.5-liter electrically-supported plant remains the only choice.

The boxy design definitely draws attention. The interior also seems elegant and luxurious. So, the first impression is good. However, the time will show if the new Venza can meet the expectations. Fans are waiting for the first drive impressions, real-world fuel economy numbers, and in a few years, we will see what is the resale value.

Hybrid Drivetrain Is the Only Option

Under the hood of the new 2021 Toyota Venza will be a hybrid configuration. Well, being positioned between Rav4 and Highlander leaves a lot of options for engineers. Nevertheless, they decided to go with the one we can find in the larger SUV. Recently, Toyota updated the Highlander Hybrid by replacing a V6 petrol engine with a smaller base unit. The system is still pretty capable. For the 2021 Venza, a 2.5-liter unit in the hybrid configuration is going to deliver 220 horsepower.

There are three electric motors available in this system. A gasoline engine and two batteries will shift power to front wheels, while the third motor is sending energy to the rear axle, making a Venza AWD. Official tests are running to confirm the company’s claims – the SUV will achieve 40 mpg of the combined fuel economy. Not impossible, since Highlander Hybrid can do 35 mpg and it is larger and heavier than the two-row SUV.

Toyota Highlander is one of the best-selling mid-size SUVs in the US. It offers three rows of seats and capacity for seven passengers. Many other companies added a two-row mid-size model, such as Honda Passport, Ford Edge, or Nissan Murano. Instead of recusing seating capacity in the existing Highlander, Toyota introduced Venza.

Again, this is not the most popular class. If you are looking for more power, towing capacity, and cargo space, you will go after a three-row SUV. If the fuel economy is important, then compact crossovers are a better deal. Nevertheless, with 40 mpg, the 2021 Toyota Venza will be pretty competitive.

Without the third row, the cabin will be pretty comfortable for passengers. It will also provide more space behind rear seats for storage. Highlander can offer more, but you have to fold seats. Dimensions are still not official. However, the Harrier SUV, the match for the Japanese market, is 187 inches long. That is exactly between two siblings we already mentioned – Highlander (195 in) and Rav4 (180 in).

The base crossover SUV will be available in the LE trim. Further options include XLE and Limited packages. Even the entry-level model looks nice with upscale materials and cool details. The design language reminds us on Rav4 and its cabin. The company did not unveil all the details and features list. Nevertheless, the new 2021 Toyota Venza will offer the Star Gaze sunroof at some point. This cool feature is available only in some high-end luxury vehicles.

The center of the infotainment system is an 8-inch display, which grows to 12.3-in with XLE and Limited models. Now, Toyota includes Apple CarPlay and Android Auto. Still, we expect more from the next-gen Entune system. Navigation is optional, as well as the premium audio by JBL.

Standard safety features are emergency braking, adaptive cruise control, and lane-keeping assist. The SUV is yet to be analyzed by NHTSA and IIHS to provide precise crash test results and overall safety ratings.

When Will 2021 Toyota Venza Be Available?

The new 2021 Toyota Venza was planned to debut at the NY Auto Show, which is rescheduled. The company didn’t want to wait and released some of the details on the official website. The sales should start this summer, but it will depend on the situation with the COVID-19 pandemic.

By being a hybrid model, we expect the new Venza to take the pricing position between its siblings with the same types of powerplants. Experts say the SUV is about to start around $34,000. Since we know which are the other packages and how much such upgrades cost on other Toyota vehicles, the XLE will be under $40,000, while the base Limited edition could go up to $45,000.