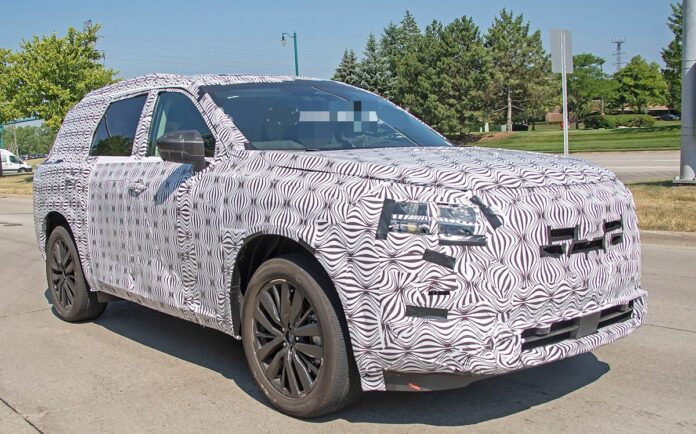 After the first updates of the best-selling crossover in the US, we can expect the debut of the mid-size three-row SUV. The 2022 Nissan Pathfinder will be the all-new model with fresh styling and features. There are no too many details about the redesign, but the first spy photos are available. We are still trying to find out if the SUV is getting a hybrid drivetrain. Anyway, some upgrades are certain. A more efficient hybrid or a more powerful setup will enhance the offer for sure.

The 2022 Nissan Pathfinder will also bring new styling. The facelift is making the SUV fresh and eye-catching. The vehicle remains a seven-seater. Additional options can cut one spot and make more space behind. The third row might be roomier since this is one of the downsides of the SUV. Plus, engine options. Pathfinder is using a reliable V6. But, its rivals are already available with hybrid setups. High-end models are using performance engines, with turbo-six or V8 units.

The mid-size SUV segment is pretty hot nowadays. This class is catching up with compact crossovers in the number of sales per year. Buyers are opting to pay extra to get more power and space. This is important if you are traveling a lot. On the other hand, mid-size models are not as big as full-size vehicles, meaning the fuel economy and MSRP are budget-savers.

The competition in the market is very tough. Toyota Highlander and Ford Explorer are the best-sellers. These two will offer you powerful hybrid configurations. Ford makes its SUV a performance model with extra power, while Toyota sacrifices the power to improve the gas mileage. Highlander will return 35 mpg. These are the versions that the 2022 Nissan Pathfinder cannot challenge immediately after the redesign, but after a few next upgrades, it is possible. Until then, the SUV will take on the Chevy Traverse, Honda Pilot, and Kia Sorento. The PRO-4X model might add another dimension to the offer. Off-roading in the combination with a powerful engine cannot be boring.

The 2022 Nissan Pathfinder will keep the V6 engine as the base unit. A 3.5-liter engine is a reliable partner for so many years. 285 hp and 260 lb-ft of torque are enough for most needs – if you are going to commute a lot, drive the SUV in urban areas, or go for longer trips. The fuel economy is not bright, especially in the city. The rear-wheel drive setup returns 20 mpg and AWD consumes slightly more. On highways, the rate jumps to 27/26 mpg (RWD/AWD). A CVT transmission could also be replaced, which is going to lead to a better fuel economy. Pathfinder is one of the best haulers in the mid-size SUV segment, with a towing capacity of 6,000 pounds. Most rivals are offering 5,000 lbs.

We wish to see the 2022 Pathfinder with a more powerful configuration. A turbocharged V6 can fit the engine room and boost the outputs to at least 350 horsepower. That is the world of base luxury models, such as BMW X5, or Audi Q7. Also, a V8 is possible, although there are no too many mid-size SUVs using engines with eight cylinders. Grand Cherokee and Dodge Durango are examples. What’s more, Nissan could go with a smaller block, turbo-four. In this case, the SUV would get a slightly better fuel economy, but the towing capacity is about to drop.

The Return of Pathfinder Hybrid

A few years ago, Nissan tested the market with a hybrid variant of the Pathfinder. Nevertheless, this didn’t last too long, since the price was higher and the setup couldn’t improve the fuel economy enough to cover the investment. Meanwhile, the technology evolved and we are seeing more and more hybrid SUVs. Some companies are already out with emission-free all-electric units. The 2022 Nissan Pathfinder Hybrid will be the first step in the evolution and the Ariya concept can offer some solutions.

Photographers were lucky to catch the new 2022 Nissan Pathfinder on the streets. Heavy covers are promising a lot of fun and a new design. It is not a surprise, since the company refreshed the SUV two times after the arrival of the latest generation in 2013. The 2022 YM will bring the most updates, according to spy photos. Camouflage is not letting us know details, but the company can’t hide everything. Refreshed fascia, lower stance, updated interior, and a few more details were spotted already.

We can even throw a glance at the cabin. The layout seems to be the same as the one the company is going to use on the new Rogue. The large infotainment screen is at the center of the control panel. More functions are options that will definitely be available on the all-new 2022 Pathfinder.

According to sources, the SUV will debut in the first quarter of next year. Anyway, the sales will start in the second half. We can expect new prototypes with less camo before the premiere. A hybrid version might be launched when the base model hits dealerships.