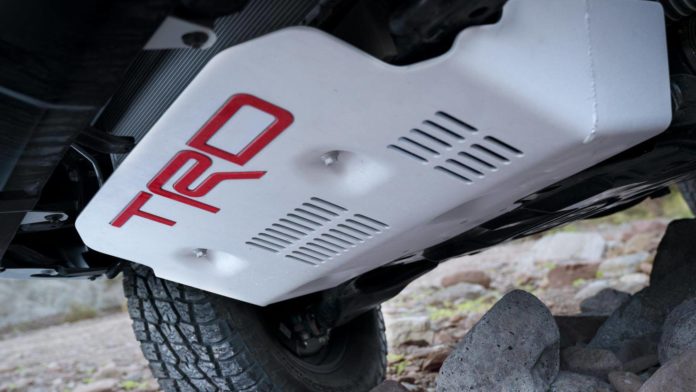 This year we can see the new member of Toyota’s TRD Pro lineup. This mean off-road package has been added to the latest Sequoia model. The big SUV beat the competition within the family. Experts suggested that the squad will grow and we believed the compact RAV4 and luxury Land Cruiser were among favorites to get such an upgrade. However, the expansion is not over yet. Soon, we will see more models, and we believe the 2022 Toyota RAV4 TRD Pro is the frontrunner.

This is the best-selling Toyota in the USA. The compact crossover achieved over 400k sales last year. Some of the reasons are reliability, durability, fuel economy, and a hybrid engine. The SUV was the first such model to offer 40+ mpg. So, the versatility of the RAV4 made it so popular. But, one piece of the puzzle is missing – an off-road capable model. The carmaker will adapt the best features and parts and the crossover will be ready to conquer the outskirts.

The only problem might be a power output. We doubt the 2022 Toyota RAV4 TRD Pro will get a V6, while the four-cylinder units can’t offer a lot of juice for toughest terrains. But, the Japanese company always has a response to any challenges. We will see what will be the solution now.

The first information about the 2022 Toyota RAV4 TRD Pro appeared on the Motor1. The reliable source made the first image of the upcoming vehicle. Well, the crossover is new, so the package is going to be based on the standard edition. However, the appearance will be meaner with all the upgrades Motor1 editors believe that can happen.

First of all, the small SUV will be lifted. Currently, the gap between the body and the ground is 8.6 inches. The clearance will gain an extra inch, or even more. Of course, all-terrain tires are there for any adventure. Furthermore, the design highlight is the big “Toyota” badge on the front grille. It is not hard to notice a different bumper and skid plates that should protect the body. Editors also added the square wheelarches and the snorkel. We can find this on the Australian Hilux trucks. TRD Pro badges on doors are a small detail, and we can also notice the side skirts protecting the underbody. Roof rails are added as well.

Under the bonnet of the standard unit is a 2.5-liter four-cylinder engine. The powerplant is ready to produce 205 horsepower. Most experts believe this is just not enough for serious off-roading. On the other hand, the most popular all-terrain model in the US, Jeep Wrangler, is getting energy from a smaller, but turbocharged drivetrain. Toyota might use the same recipe for the RAV4 TRD.

Still, the Japanese company is paying more attention to the greener sources of power. RAV4 was one of the first hybrid units in the market and for a while the only one that could return more than 40 mpg. Now, there is a competition in the Ford Escape and Honda CR-V. But, the Japanese company has a response – Rav4 Prime is a plug-in hybrid with an extended range. This sets up new challenges to rivals.

We were wondering if the 2022 Toyota RAV4 TRD Pro could get such a configuration when it appears. The PHEV configuration drops the outputs from the internal combustion engine but adds extra energy from a pair of electric batteries. The total power the Prime version is going to deliver will be around 220 hp. This is a boost compared to the standard setup, but it is still questionable if 220 ponies are enough for off-road adventures.

When Will RAV4 TRD Pro Be Available?

Toyota is serious about the expansion of the lineup. Plus, the RAV4 is not going to be so dominant in the most popular car segment in the world with the growing competition. Ford Escape Hybrid is coming with 44 mpg, and soon, some other company will also launch the competitive PHEV model. On the other hand, Jeep Wrangler is dominating in the off-road segment. But, if we have to bet which company could spoil the supremacy, we would go with the Japanese company.

The 2022 Toyota RAV4 TRD Pro will enter the market with the high reputation. The base model is the best-seller in the segment. On the other hand, the TRD Pro package is well-known for the capabilities it brings to other vehicles. So, the expectations will be high as well. Plus, there is a new rival on the horizon – Ford Bronco. Toyota is not going to rush with the arrival of the RAV4 TRD Pro. We could see it in the summer of 2022. Still, fans believe the carmaker is not going to wait for so long and the crossover might hit the market late next year. The price won’t be under $40,000, even with the four-cylinder engine.