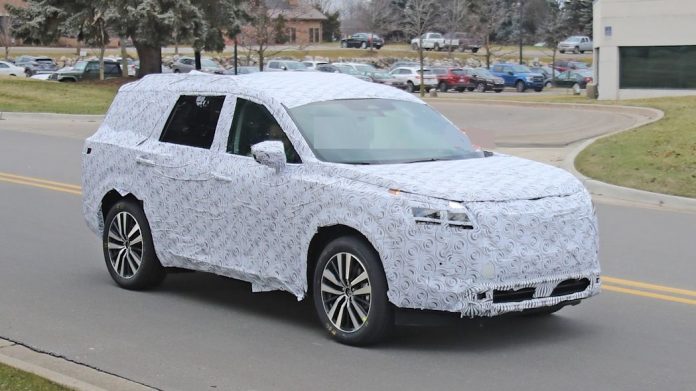 It is time to reveal the truth about the 2021 Nissan Pathfinder. The SUV is getting the facelift and the first spy photos are finally confirming the old rumors. On the other hand, the camo is hiding details from fans. The redesign takes place at the right time when the mid-size three-row segment is one of the hottest classes in the market.

From what we can see on spy photos, Nissan is following modern trends. Everything is a guess, but the Pathfinder brings all its fans can expect. Grille is larger and the dimensions of the vehicle remain the same. The company put some fake panels to make a fake illusion of the shape. It is the first appearance and the initial impression is that the 2021 Nissan Pathfinder is not taking a huge step in evolution. However, the redesign will make it more attractive.

What about the engine room? Well, we still don’t have any info about drivetrains. The 2021 Pathfinder should stick to the reliable and proven 3.5-liter V6 unit. But, a hybrid unit is something that makes all mid-size SUVs more competitive. For now, Nissan is not making big announcements. The new drivetrain might be available late.

Spy photos are always welcome. But, this time, except for the confirmation of the redesign, images are not showing us more. The 2021 Nissan Pathfinder is well-hidden beneath the panels. There are even some fake parts, especially under the vehicle, to keep you on the wrong track about the new look of the SUV. Pathfinder seems to be as big as before, meaning there won’t be extra space inside. However, we cannot be precise in a couple of inches, which could mean a lot. Outside, the SUV is getting a new, larger grille. Camo can’t hide that.

The interior is still a mystery. But, the company is updating its entire lineup and photographers caught the cabin image of the new Rogue. Everything seems to be bigger. Nevertheless, Nissan gave its best to hide as much as possible. But, the huge infotainment screen is not easy to cover. More infotainment and safety features are expected. ProPilot system is something that makes a ride much comfortable. The evolution of this platform will lead Nissan’s vehicle to the autonomous drive. The manufacturer promised Level 4 in the foreseeable future.

Under the bonnet of the 2021 Nissan Pathfinder should be a new unit. We place our bets on a 2.0-liter turbocharged four-cylinder engine, debuted on the new Altima. The powerplant is ready to crunch 235 hp and 270 lb-ft of torque. However, it doesn’t seem to be enough for a three-row SUV. So, Nissan is definitely keeping an aging V6 mill. A 3.5-liter displacement is good for 285 hp and 260 lb-ft of torque. the SUV is getting 6,000 lbs of towing capacity, which is more than most competitors can do. The new turbo engine might be fuel-friendlier, but everything else will make you opt for a V6.

The new version of the SUV is on the way. For some while, we are listening about the new engine, and it can finally come out as the 2021 Nissan Pathfinder Hybrid. The SUV used to offer this kind of a unit, but the carmaker didn’t find it expendable to update it. But, modern trends are dictating the return of the hybrid engine. A V6 could serve as the base for the configuration like Ford did with Explorer. On the other hand, a turbo-four unit is also an option. Toyota maximized fuel economy on its Highlander Hybrid, by sacrificing power.

The new Pathfinder is coming later this year. How can we be so sure? Well, it is Nissan’s usual strategy. A few months after the prototype debuts on the streets, the company reveals it officially. We are all waiting for the second half of 2020 to see if the SUV is going out with the new generation. The 2021 Nissan Pathfinder is not going to take off its camo before this happens, so most details will be kept for the premiere.

The redesign will definitely increase the price of the vehicle. The base model will start around $35,000. Platinum is probably keeping its spot as the most equipped model in the lineup. This package brings the Pathfinder into premium waters with a price close to $50,000.